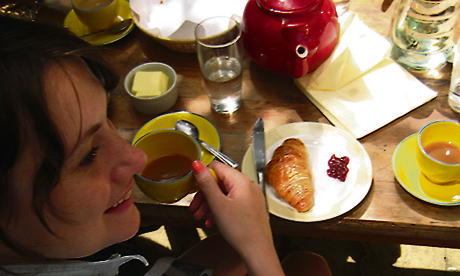 Photo courtesy of Maya at the Bruncheon Club

Wonderful as the novel is, I cannot help but think Sinclair might have been a touch off with his colour palette.

For me this borough’s hue is forever burgundy, an association from the classic British comedy A Passport to Pimlico, in which residents find themselves dwelling in the independent microstate of Burgundy thanks to a bureaucratic oversight.

The ‘Burgundians’ revel in their new found freedom, and the experience unites the small community.

If any region of contemporary London stands comparison then it is in Hackney that this imagined Burgundian spirit is realised.

A recent manifestation of this character is the thriving underground restaurant scene within the borough.

In 2009 a tide of secret dining was unleashed across the capital, inspiring a host of amateur cooks to open their living rooms to ‘donating’ dinner guests.

Hackney, more than any other borough, has revelled in the flood. At any one time the borough accounts for almost half of the underground restaurants in London, with new ventures springing up all the time.

The Secret Ingredient, Green Onions, The Bruncheon Club, The Pale Blue Door, The Loft, Fernandez and Leluu, The Claptonian Arts Club, the list goes on and on. Why the preponderance?

Could these underground restaurateurs simply be seeking to engage with their surroundings, hungry for reality in these Twittering times?

The experience of Uyen, one-half of London Fields-based eatery ‘Fernandez and Leluu’, certainly suggests so.

It has gone to great lengths to accommodate its patrons, as Uyen explains over a coffee on Broadway Market. “About ten guests have slept over so far. We always have dessert with them and we’ve just stayed up chatting until 2am, 3am, even 6am once, and they end up sleeping everywhere.”

Uyen, born and bred in Hackney, feels more at home than ever, “we’ve made lots of friends, been invited round for dinners, got to know the stallholders on the market. We’re part of the community.”

A simple matter of ‘why not?’

Community kinship may be an upshot of the secret restaurant trade but I wondered how budding chefs plucked up the courage to open in the first place. I put this question to Uyen.

“We saw other [underground] restaurants nearby and thought why not?”. It’s not the first time I’ve heard this motivation cited. A key ingredient for these establishments seems to be suitably adventurous folk willing to ask “why not?”.

The minds behind both The Bruncheon Club and The Shed have said the same, and all three referred to the same source of inspiration. But who is this node, daring culinary dabblers across the borough to market their home-cooked wares?

Well, Horton Jupiter is your man. A musician by trade, Horton runs one of the most popular underground restaurants in Hackney, The Secret Ingredient.

Gathering over 2,500 fans on Facebook since he and his girlfriend began serving a Japanese vegan menu in their front room in January 2009, his meals seem to inspire many of diners to play maitre d’ themselves.

I ask for Horton’s take on the proliferation of the scene, “It’s the Hackney mentality isn’t it – why not? This is where the action is – people here want to live a rich life. They are adventurous, not-subscribed types”.

Creative ways to be poor

The income from The Secret Ingredient has allowed Horton to exercise his musical passion.

Currently playing in two bands, he believes the underground restaurant allows for a flexibility that other badly paid jobs rarely consist of, or “another creative way to be poor”, as Horton puts it.

He is not the only restaurateur turning secret nosh into useful dosh for other projects. Consider the Claptonian Arts Club.

First set up in September 2007 as an intermittent pop-up gallery in the proprietor’s own flat, Scandinavian brunches were served free to artists and buyers in an informal buffet setting.

It was the expense of shipping artwork from New York that in the autumn of last year spawned the notion of using these brunches to contribute towards the cost. Thus another underground restaurant was born.

It is these folk, Hackney’s open-minded crowd of artists, creatives and media yuppies, who are happy to open their homes in an adventurous lust for exciting, real experience.

This lust is partly satisfied with the restaurants appearance of operating on the edges of society, or, “breaking the law in a gentle way”, as Maya from The Bruncheon Club puts it.

It is this rebelliousness, a desire for a little more freedom from interference, which provides the link between the secret dining boom in Hackney and the imagined Burgundy.

I can’t put it any better than Horton Jupiter, who nails the raison d’etre of the underground restaurant, “you don’t need to go down official channels to get a square meal.”

For booking and more info on the restaurants mentioned, contact them directly:

← Hackney Council to invest £1m in Ridley Road MarketPolitics, scandal and morality: the word on the street →