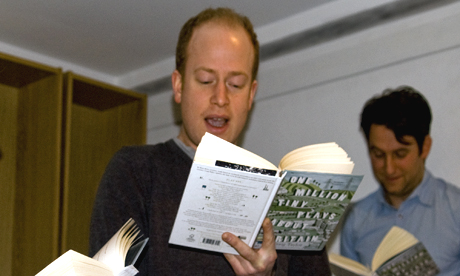 ‘One Million Tiny Plays About Britain’, a series of small plays by Craig Taylor, was performed at an independent bookshop in Lower Clapton last month.

Taylor’s plays are teeming with expertly observed mini-dramas that have captured real life snippets of day to day conversations in contemporary Britain.

Whether humorous, ludicrous, heart-breaking or morose, ‘One Million Tiny Plays About Britain’ is credible and authentic: the audience recognises those moments in life when we eavesdrop on other people’s conversation and can’t help but be instantly transfixed.

Whilst Taylor and his four actors – Matt Burt, Naomi Kerbel, Jack Ladenburg and Oliver Wood, were the cast playing the characters at this sold-out event, the plays also included some audience participation.

Lauren Jones, a local resident commented, “I love this bookshop. There is a real sense of community and I think that really shows tonight.”

Sean Hughes, who lives on Lower Clapton Road added, “Craig Taylor’s observations of everyday dialogue are spot on. I lived here for most of my life and know I’ve met all of his characters.”

More on ‘One Million Tiny Plays About Britain’ here.