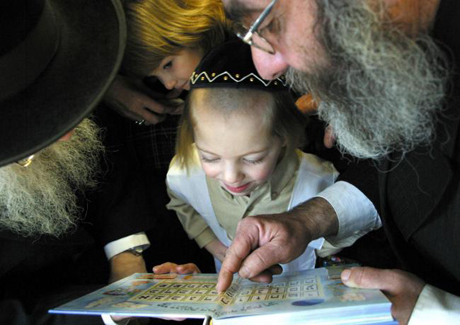 I made my home in the heart of Stamford Hill in 1999 becoming, as I put my foot on the property ladder, goy next door to Europe’s largest settlement of Orthodox Jews. Over the years, I’ve observed the observant in this ‘square mile of piety’ and relished those moments where our lives collide.

It always made me nervous, as a kid, when new neighbours moved in, especially if it was goyim. You never knew in advance what threat they might bring. Would they have kids who would shout ‘Jew Bug’ when we came home from school? Worse, would they have a dog?

I’ve learned a lot. As a child, I had only an abstract and rather distorted sense of what Judaism was. Sure, I heard the historical narrative of the Jewish people read out, piecemeal, in Mass; yet, to use today’s jargon, there was always an unspoken feeling that the Old Testament was simply a beta release of The Word of God. Only the Gospels, which were read with diffident solemnity by the priest, could be regarded as Bible 2.0. Though that was less to do with the Catholic Church than the certainty that Jesus Christ was, like the congregation, really from south Lincolnshire.

Ben, the new goy next door, it turned out, had no dog and no children when he arrived. He was very friendly and always liked to talk to us. My father used to tell me not to talk to him but my mother always told him it could do no harm. His wife did become rather fat soon after they moved in. When I asked him why, he smiled and told me she was going to have a baby. When I asked my father how he knew, my father got very angry and told my mother angrily, “I told you!”

With that kind of background, there’s little wonder my new neighbours on the Hill fascinated me. The early years were full of surprises and questions. No sooner would I get to grips with the reason why some Chassidic men wear furry hats on the Sabbath (it’s a tradition for the married) and what they are called (shtreimels, usually), than I’d walk out of my house to find dozens of Orthodox children charging about dressed as cowboys, firemen and biblical characters. Then I’d come home and hear the strains of tipsy religious singing from neighbouring houses (explanation: it’s Purim, and time to celebrate the deliverance of the Jewish people from Haman the Agagite’s plot to annihilate them. I’ll drink and sing to that, even if I’m not dressed as John Wayne.)

New neighbours are always a problem when Shabbes and Yomtov arrives. They always complain about the noise by night when we sing during the evening Yomtov meal. My father says that the goyishe families never eat together except at Xmas and they hate it so much they all get drunk. Actually on Purim my father also gets drunk by the meal but when I said that he got angry again and said that is different. I told him that Ben told me his family ate together every Sunday. He gave my mother a look and she gave me one.

Usually, what cements friendships between neighbours is the sharing of food. That’s something that I couldn’t easily do with the Orthodox. Certainly, I’d be up for sharing some gefilte fish or latkes, but it would sadden me that I couldn’t return the favour. My cooking isn’t bad, but it’s far from kosher.

Part of the Purim tradition is to send food to all your friends. My mother prepared her special Challas and chopped liver paté, and sent some in baskets to all the neighbours. When she saw Ben standing outside she gave me one and told me to give it him. “If he gives you something back”, she admonished me, “tell him it’s not kosher.” He was very pleased and asked me if my mother baked the Challa herself. I wonder if goyim send each other bought Challes?

Not able to break bread together, people look for other ways of bridging the divide. In my experience, the two topics that my neighbours and I share a poetic interest in are good tailoring and bringing up children. The ideal conversation might, in a condensed form, start something like this:

“Thank you. It was my grandfather’s.”

“The cut is beautiful. Who made it?”

Pause. Shy glances all round.

“Ah, my youngest is eight weeks. My eldest is just about to get married.”

“How many children have you got?”

My mother talks a lot on the street with Ben and his wife. They have a baby too and they always compare baby stories. My father says goyishe children are more spoilt because they don’t have many brothers and sisters. When I asked why he said because God does not give them more. When I am big I am going to ask God to give me only two or three too because I think it is quite nice to be a little spoilt and to have always new clothes instead of always hand-me-downs. Although now I am getting a new Shabbes suit because my biggest brother is getting married.

It’s these exchanges that are the most valuable. After all, when the Men In Black get angry because the council won’t let them build larger extensions; and when the local gentiles are riled to see their pub converted into a synagogue; it helps defuse the situation if we can remember the good things we do for each other. That’s why I’m eternally grateful to my neighbour for lending me a tin of kosher beans to smash in my front door, and – when that failed – bringing almost the whole street to my assistance. Equally, I hope other neighbours remember the times I’ve stepped in on the Sabbath to switch off gas hobs, shut down boilers and insert prepayment keys into the electricity meters. After all, it’s these moments we share that help us to become the best of neighbours.

The boiler went off this Shabbes and my mother was worried the baby would be cold. Although it is not allowed to turn on electrical things on Shabbes when it is a risk to life especially for a baby it is ok to ask a Goy to do it for you. My father asked me to knock on Ben’s door and ask him if he would do it for us. He called him ‘the nice goy from next door’. I told him he is called Ben and he said “Yes, him”. He got locked out of his house last week and all the yiddisher neighbours came out to help him. My mother said it is a Kiddush Hashem when you help a goy because then they see that we are not only interested in ourselves. but I think we would have done it anyway because everybody likes him.

There is another removal van on the street. The people whose dog always chases us are leaving. I hope it is another nice goyishe family who moves in. I never thought I would think that.