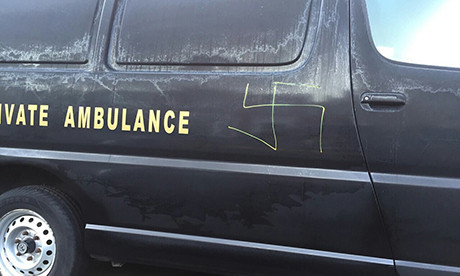 A vehicle graffitied with a swastika symbol. Photograph: @Shomrim_Official

Anti-Semitic slogans and swastika symbols were graffitied onto vehicles and houses in Stoke Newington last night, according to police.

The graffiti appeared on up to 20 vehicles and was also scrawled on a window of a house on Osbaldeston Road, in Cazenove Ward.

This follows two incidents earlier this month in which swastikas were scrawled on the main sign of Jubilee Primary School in Filey Avenue.

Last month over 100 car tyres were slashed in the orthodox Jewish community in what the police described as “racially or religiously motivated” criminal damage.

Barry Bard, Coordinator of Shomrim, the Jewish voluntary police force in Stamford Hill said the graffiti was being treated as a hate crime. He said: “Shomrim are committed to bring a stop to these senseless and mindless acts of vandalism, and are working closely with the Police investigation to assist in every possible way.

“Similar swastikas have appeared in the same area over the past few weeks. Police are taking these incidents very seriously and are treating it as hate crime, I urge anyone with information to call 101”. 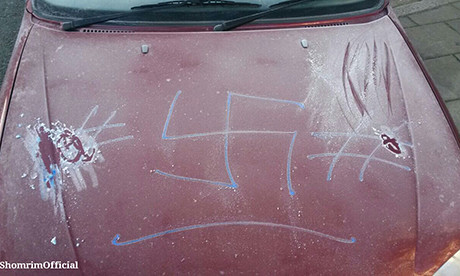 Hackney Police Inspector Jeoff Bull said: “We will not tolerate anti-Semitism or racism of any kind. We are doing our utmost to trace and bring to justice the suspects involved in this racist graffiti as well as reassure all of our communities”.

Chair of Hackney police Independent Advisory Group Moishe Friedlander said: “We as a community are delighted with the rapid response and supportive nature of MPS Hackney officers in support of the community and investigation of this crime. Extra reassurance patrols will be forthcoming”.

Hackney Police Tweeted: “There has been a series of anti-Semitic criminal damage to cars & houses in Osbaldeston Rd, N16. #GDCSU are investigating. We are working with the local community. Anybody who is an as yet unidentified victim or witness please call 101″.