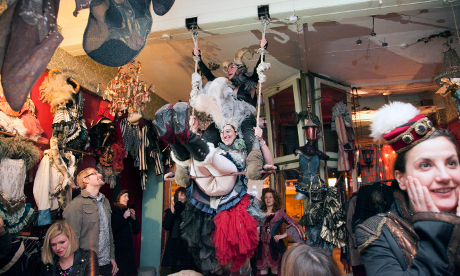 Their events always take place in a hidden location no more than five minutes walk from an Overground station announced to guests by text message on the night.

On arrival at that stop, they must follow a series of clues to locate exactly where they’ll be eating.

No information is available in advance about Gingerline’s new experience, dubbed the Hideout, and ticketholders shouldn’t expect anything similar to previous events. “The whole point,” says Mountfort, “is that we’re going to take people into a new world.”

Things you can expect, however, are an elaborately decorated environment, exuberant performers, and four courses of unusual and delicious food.

Mountfort and co-founder Kerry Adamson were inspired to base their supper club concept around the Overground by the effect it had on their lives and East London as a whole.

“I found it interesting how public infrastructure can impact on social regeneration,” says Mountfort. “We have friends across East London and can now get to them all in 25 minutes.”

And the areas where the Overground roams are a natural home for Mountfort and Adamson’s creative take on dining out. “There’s an energy in east London that’s pretty quirky,” says Mountfort. “Lots of people are really adventurous.”

The Hideout is taking place at a secret location near an Overground station until Friday 24 January.