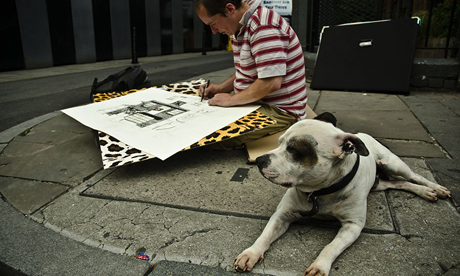 Mr Dolan drawing on a Shoreditch Street with his dog George

A former prisoner who chronicles Shoreditch’s changing streets is exhibiting his artwork in his first public show this month with help from some of the best known street artists including Stik and Thierry Noir.

John ‘John the Artist’ Dolan, 42, has lived what he describes as a “rough life”.

He has spent time living on the streets, has been in and out of Pentonville Prison over the years and is a regular feature of Shoreditch High Street with his dog George, who he has done many drawings of since he bought him as a puppy for the price of a can of lager.

Now Mr Dolan has rediscovered a long-neglected gift as an artist and has created a series of finely drawn, detailed monochrome cityscapes that he then posted to famous street artists around the world who added their own splash of colour to the drawings.

MadC, described as the top female graffiti artist on the planet, is one of Mr Dolan’s collaborators, as is ROA, whose giant animals including hedgehogs and herons adorn many buildings in the East End. Mr Dolan describes ROA as “the best technical artist in the world”. 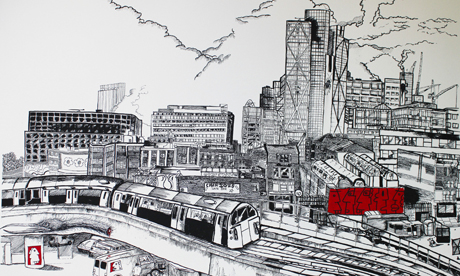 A detail from one of Mr Dolan’s pieces, which he collaborated with Thierry Noir and ROA to produce

Mr Dolan’s pieces have fetched as much as £15,000 and his work has been published in a book, Shoreditch Unbound, which also features Tracy Emin and Gilbert and George.

“I like to show the rougher side of Shoreditch,” he says. “I like to draw buildings that are really decrepit, but I also use my imagination, so the scene looks different from what it looks like in real life.”

While in Pentonville serving time for what he says were petty crimes, he did not do any drawings.

“There is no inspiration in prison,” he says. “There are just bare walls and bars. I have been thinking of trying to go back into prisons as a visitor to do art projects with young prisoners.” 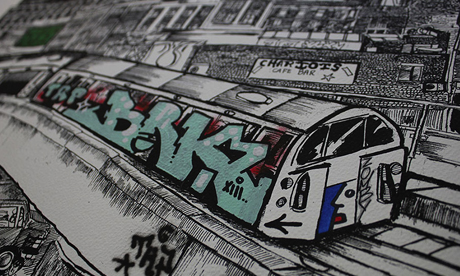 A detail from one of Mr Dolan’s artworks

Richard Howard-Griffin, whose gallery is hosting Mr Dolan’s show, said: “What John represents is the unseen side of Shoreditch, the street side. He is someone who is really from the street and it is quite interesting in the face of all these designer boutiques and the way the area is being remodelled.”

← Shaky hands, shrieks and tears… It must be A-level results dayHome at the National Theatre – review →