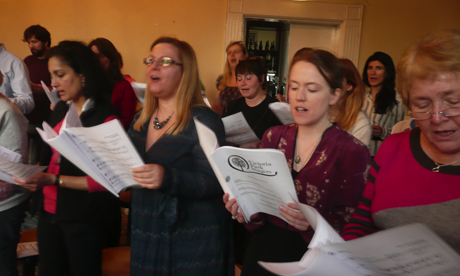 Psychiatric nurses and an origamiist are among the choir's members

Despite having only moved to Hackney six weeks ago, Hannah Brine is already making a difference to the community.

Last month Hannah, 33, a professional singer and conductor, launched the Victoria Park Singers, a community choir that meets every Wednesday at the Royal Inn on the Park pub on Lauriston Road.

The amount of singers turning up has far outstripped her initial expectations, with the choir already boasting 40 members.

“It’s going really well,” she says, “and we’ve got quite a few men too which is always a plus point.”

Hannah, who is originally from Leicester, is no stranger to choir starting, after launching one in her home town and another in Kensington. For her, part of the attraction is the variety of people you get to meet.

She says: “We’ve got people who are psychiatric nurses, a couple of film producers and we’ve even got a full time origamiist – a man who works full-time doing origami – can you believe that? And when you ask how far people have travelled, everyone’s very local.”

Although some sheet music is involved, Hannah assures me that anyone at all is welcome to join.

“You don’t have to be able to read it,” she says, ” and for the harder songs I make up MP3s for people to stick on their ipod.”

Some of the pieces the choir has tackled so far include a song by bossa nova legend Sergio Mendez, a Finnish folk number and a Welsh nonsense lyric.

Journalist Martha de Lacey came along for one rehearsal and found herself hooked. “Two hours whizzed by, and Hannah’s choice of songs was perfect – tricky enough to be a fun challenge while not so daunting as to put people off coming back,” she says.

“We even gave our first impromptu performance to two pub locals, who looked mega impressed.”

The choir’s first proper performance is ear-marked for Wednesday 25 June, though Hannah doesn’t yet know where it will take place.

“I thought some people might be nervous about performing so we could just do it in the pub,” she says. “But with the amount of people joining up I’m not sure if we’re all going to fit in!”