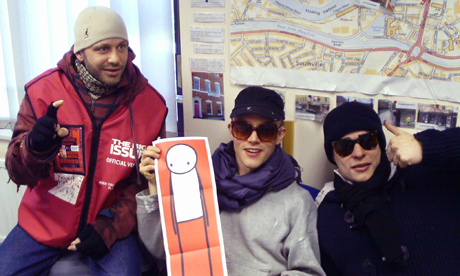 In a move shunning the art world, Hackney graffiti artist Stik put his exclusive work in the hands of the homeless in a free giveaway with the Big Issue magazine last week.

Stik, who was once homeless and whose seemingly innocent yet political street art can be seen throughout the borough, was instrumental in the pioneering national project.

Usually seen donning sunglasses to hide his identity, Stik used to live in St Mungo’s hostel on Mare Street with a vendor named Pilgrim who introduced him to the Big Issue. This Sunday, having never sold the magazine before, Stik turned his hand to vending “for a laugh”, and “sold two”.

The artist’s work, favoured by celebrities such as Elton John, has caused a national stir, and Stik has been signing posters for vendors around the country. The limited edition posters have been sold online, with one seller on eBay asking over £70.

The artist says: “The project itself was the important bit and the interaction between people that it caused. And the Big Issue is an organisation that gives people the chance to start their own sort of micro-business. It is great for people who want to – and are able to – help themselves a bit.”

Big Issue chief executive, Stephen Robertson, says: “By a long, long way, this is the best project we’ve ever been involved with.”

For many homeless people, being isolated and ignored is the norm and the piece, entitled ‘Look’, represents “witnessing or being witnessed”.

When Stik was homeless he says the worst thing was “being patronised. Also it’s horrible when you can’t wash, you can get pretty smelly and it’s a bit embarrassing sometimes.”

Stik is known for using his art to campaign on issues affecting society. When asked if he would challenge the council on anything surrounding homelessness, he said: “I used to squat where I could, why did it have to get banned? A lot more people are on the street now.”