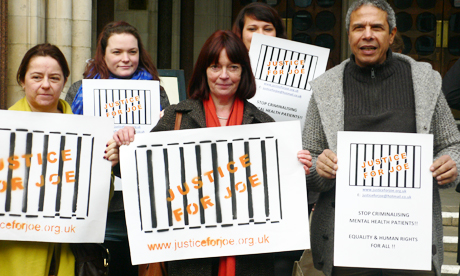 A mentally ill man from Hackney who tried to escape from a psychiatric ward has had an indefinite prison sentence for arson quashed following a hard-fought campaign by his mother.

Joe Paraskeva, 22, had an imprisonment sentence for public protection (IPP) changed to a hospital order at a high court appeal today after medical evidence showed he was suffering from a psychotic illness when he tried to escape a psychiatric unit by setting fire to a door.

The indefinite term of his original sentence meant he could potentially have been jailed for life – in prison and not in a psychiatric hospital.

His mother, Linda Morgan, said she was “relieved” at the decision but will continue to campaign against his criminal conviction and the criminalisation of mental health patients in general.

“There are still nights when I wake up in the middle of the night thinking, ‘I can’t believe society can do this to people who are the most vulnerable,’” she said after the hearing.

Morgan said her son is “in the proper place, he’s getting proper care and treatment”, adding: “When I look at his face today and see how much better he is getting, I know it’s all worth it.”

Paraskeva was diagnosed with bipolar disorder as a teenager and voluntarily admitted himself to Homerton Hospital following a mental health crisis in October 2010.

He had become frightened by his own behaviour – including hitting his sister and smashing mirrors with his fist – when his mother accompanied him to the hospital where he was sectioned under the Mental Health Act.

48 hours later, the then 20-year-old attempted to escape the unit by setting fire to an aerosol can which he flung towards a door. No one was hurt in the incident, but staff were “frightened” by his behaviour and would not allow him to be readmitted to the hospital afterwards.

Paraskeva was sent to Chelmsford Young Offenders Institution, where he stayed for over a year without proper treatment for his illness.

He stopped eating and taking his medication and refused to leave his cell or see visitors including friends and family for eight and a half months due to his deteriorating mental state.

As a result, no psychiatric report could be obtained in person and he was convicted of arson at Snaresbrook Crown Court in April 2011 with no mitigating circumstances involving his mental health taken into account.

Paraskeva was eventually transferred to a psychiatric hospital after a medical report was obtained independently by his family, but could legally have been transferred back to prison at any point until now.

Morgan said: “Arson is one of the most common expressions of distress… that is why there are prohibited items. People do self harm, they are destructive, they do attack each other.

“All sorts of things happen in psychiatric wards, so he should not have been allowed access to those things and they’re still being allowed in some places.”

In quashing the original sentence, Lord Justice Gross said that doctors’ reports had shown Paraskeva was likely suffering from a psychotic illness relating to paranoid schizophrenia at the time of the offence, adding: “It is unfortunate that such evidence was not available to the sentencing judge. We have no doubt that the evidence would have been admissible if it had been available.”

Marjorie Wallace, chief executive of mental health charity SANE, said: “It is shocking that a severely mentally ill 22-year-old man should have been treated as a criminal and detained in prison rather than a psychiatric hospital.

“He is one of thousands of young people who have been shunted into prison due to the failures of psychiatric services to ensure that they receive care and treatment, rather than being doubly punished by severe mental torment and confinement to a prison cell.”