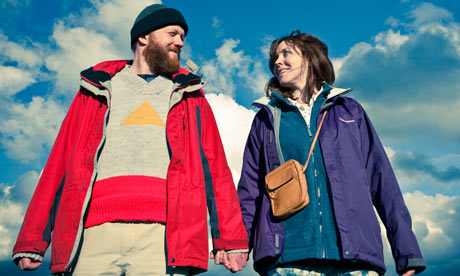 This followed his impressive, but low-budget social realism debut Down Terrace (2009) and the buzz has placed Wheatley in the bracket amongst Britain’s most exciting up-and-coming directors, in the good company of the likes of Edgar Wright (Hot Fuzz, Shawn of the Dead), Duncan Jones (Moon, Source Code) and Steve McQueen (Hunger, Shame).

With Sightseers, Wheatley has taken what is essentially a very simple idea and made a truly hilarious dark comedy, up there with any British comedy in the past decade.

With the help of great writing, the support of off-beat comedy master Edgar Wright as an executive producer, and some beautifully-pitched performances, he has ended up with a perfectly-balanced black comedy.

Co-writers Steve Oram and Alice Lowe wrote the main two parts for themselves and are both brilliant in their roles as excitable lovers who set off on their first holiday together – a trip not every couple would consider a romantic one – which ends up being a lot more dramatic than it sounds on paper.

Lowe sent a clip of their idea to Wright (who she acted for in a minor part in Hot Fuzz) after several producers shied away from the project, deeming it too dark to be a genuine comedy hit.

However, with Wheatley’s vision and Wright’s backing, a film with such a curious-sounding premise and deadpan-pitched dark humour has been allowed to grace the multiplexes and get the airing it deserves.

Chris [Oram] and Tina [Lowe] go on a rambling-cum-caravanning trip, taking in such cultural and natural delights as Crich Tramway Village, Keswick Pencil Museum and Blue John Cavern, as they brave the cold and blustery weather to frolic and hike hand-in-hand.

Not much scope for excitement and drama you might think, but these seemingly unassuming train (or tram) spotter types don’t waste much time turning their harmless holiday into a horrorshow.

There is a great balance of acutely observed comedy and interjections of sinister acts of brutality, as the couple (particularly Chris) let the local folk and tourists wind them up.

There are also touching moments between Chris and Tina in which, amid the mayhem, we see genuine moments of warmth, excitement and quirky banter.

Sightseers has been likened to a British version of movies like Natural Born Killers and Badlands, but our odd couple are most closely akin to Early [Brad Pitt] and Adele [Juliette Lewis] in Kalifornia.

Chris is similarly the dominant, sociopathic one –although much more cultured – and Tina is the (initially) suppressed, submissive daydreamer, following her lover devotedly and recklessly down his trail of trouble.

But like any great “British version of…” the key comes with it being done so quintessentially British. The writers have sighted Withnail & I as a big influence and it shows.

There are no guns blazing and bright lights, like you have in the cartoon-like action in Natural Born Killers, in this tale of rampaging outsiders, but instead we have killing in the countryside like you might see in episodes of Midsomer Summers.

It is stripped down, honest and relatable. There is not even the choppy, slick style you see in Wright’s directorial features, no nods or asides, just grittiness, absurdity and the odd laugh-out-loud moment.

Whilst watching the couple’s trip going from unfortunate to calamitous is entertaining, it is the couple’s subtly-changing relationship that is so engrossing. Sightseers is a tour everyone needs to go on.

Sightseers is showing at the Hackney Picturehouse until 20 December.