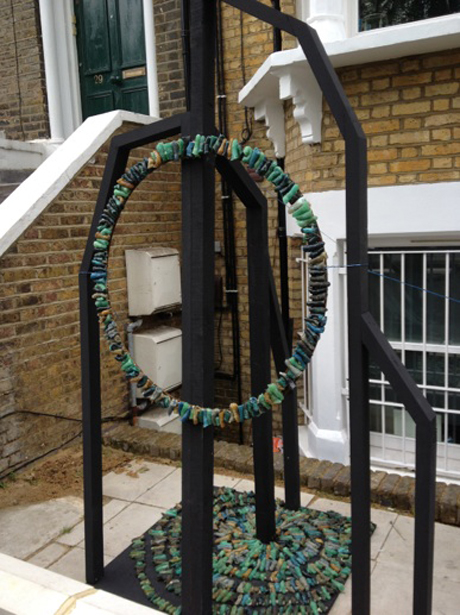 Flora Parrott’s 1000th, the eighth WW Gallery Patio Project, looks like a strange occult arrangement of dismembered fingers, a magic circle created for the performance of a mid-summer spell. In shades of blue, green and aqua, there is something unnervingly beautiful about this month’s offerings.

Like the Patio Projects which have preceded it, Parrott’s installation is sure to pique the curiosity of passers-by and neighbours. But residents shouldn’t be worried that the history of witchcraft on the Queensdown Road, which the Three Sisters pub still eerily recalls, is being resurrected.

Inspired by the Buddhist story of Angulimala, who had to collect 1000 fingers in order to complete his religious training, 1000th contemplates the frustrations inherent in those daily tasks and continual labours which remain perpetually unfinished.

Angulimala was unable to finish his task as the fingers he collected continued to rot and kept him from his target. Parrott’s 999 sugar fingers pay homage to this incomplete endeavour, along with the more quotidian routines Angulimala’s story is a metaphor for, like lists which keep growing and dust which continues to gather.

June’s heavy rainfall has already begun to eat away at the sticky sugar fingers, leaving candied drips and puddles of syrup. This isn’t cause for lamentation; the weather’s vehement tendency towards destruction brings the futility of life’s daily struggles clearly into view.

1000th is an exploration of this all too human hopelessness. The weather is being harnessed as a collaborator in Flora Parrott’s attempts to pin down the chaotic and incomprehensible experiences of life. If, as we pass, we feel a stirring of sympathy for the artist and her work, 1000th has succeeded in raising the right questions.

← Going for RhinegoldLizzie and the Yes Men – riding the ocean waves →