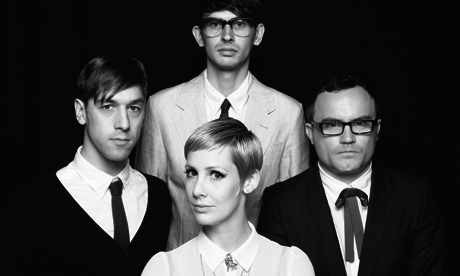 Indie: Lizzie and the Yes Men

They have just released their first single ‘The Broadwalk’ — an upbeat, drum-heavy delight fit for a Tarantino soundtrack — but Lizzie and the Yes Men have been surfing the Hackney gigging scene for the past two years.

As well as gracing Hackney’s live music haunts with their infectious beats and 60s retro sounds, Lizzie and the Yes Men have toured Italy and made appearances in Paris.

They describe their music as surf-pop indie. For those unfamiliar with this genre, it takes its name from the fact that it evokes the sea. “It uses a wet, reverby guitar so it sounds like the waves,” explains Holdforth.
An obvious example of surf-pop is The Beach Boys, whose hit ‘Don’t Worry Baby’ is covered by Lizzie and the Yes Men.

“And it is indie,” Holdforth continues, “because we write jangly poppy songs with choruses and verses.”

I met the band — Holdforth, lead vocalist; Keir Greenaway, 25, bass; Brenden Bailey, 30, guitar and Andy Goodman, 28, drums — in the Pembury Tavern. This, I later discovered, was a rather apt setting, as Holdforth met all the band members within one week in various Hackney pubs.

Citing their musical inspiration as The Beatles, Belle and Sebastian, Aretha Franklin and Dusty Springfield, Lizzie and the Yes Men are aiming for a 60s retro-chic sound and look.

Holdforth, with her platinum-blonde French crop and slender frame is often clad in the shift dresses and collars of the era, whilst Greenaway’s thick-rimmed geek spectacles are reminiscent of those rocked by Buddy Holly.

YouTube statistics reveal their fan base to be almost entirely men aged 25-55. After skirting around various possibilities, everyone agrees it is probably Holdforth’s appeal that lures the male listeners.

In person, Holdforth is chatty, confident and vibrant, but before a performance she suffers bad stage fright. “I lock myself in the toilet for an hour before performing,” she says. “If I chat with anyone I can’t focus. I need to prepare myself to become that person.”

So she is a different person on stage?

“Trying to be. If it was me, I’d be full of self-doubt and insecurity. It’s only natural. Because what you want to be is…”

“A performer,” Greenaway chips in. “A persona,” suggests Goodman.

Their biggest audience to date was the 1000 revellers they performed to at XOYO in Shoreditch. They prefer big audiences, finding that, says Greenaway, “the more people there are, the less nerve-wracking it is.”
“Yes, it’s better if it’s just a sea of heads,” adds Goodman.

Holding down full-time jobs while treading the boards is hard work. “We’d love to just be doing music,” says Holdforth, “but if we’re realistic, in this bankrupt industry, to just have a year or two full-time to see what we’re fully capable of would be great.”

Dreams include big UK, European and American tours, a Glastonbury main stage appearance and a top 40 album. “We’ve got to be thankful for what we’ve got though,” chimes in Holdforth. “Some bands haven’t even got this far.”