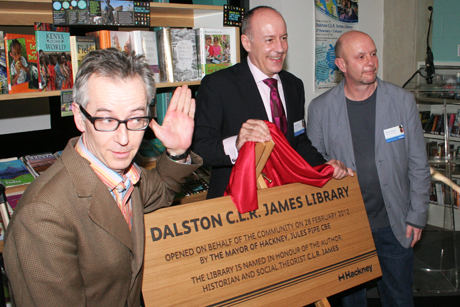 The new Dalston C.L.R. James Library, which attracted a storm of protest over plans to drop the famous Caribbean writer from its name, was abuzz on Tuesday (28 February) as acclaimed novelist Nick Hornby was on hand to help officially open the new premises.

“A new library in the year 2012 is a miracle — it’s unbelievable that you’ve managed to do this here when everyone else is closing theirs,” he said. “I was one of those kids that was taken to the library every Saturday morning, and that was a really big deal for me. […] Coming back with three new library books to try and read in a week was something that changed my life. I think libraries change everyone’s life if you use them frequently.”

The £4.4m facility is to house over 30,000 items and is the first new library built in Hackney in over two decades. Hornby was particularly enthusiastic about opening a library named after a writer who had personally inspired him.

“[CLR James] was somebody who made a difference to me when I was younger because my first book was about sport, and I wanted to try and write a book about sport that wasn’t stupid,” he said. “He was somebody who taught me you could write about sport intelligently, that sport could tell you a lot about class and politics and culture and tradition.”

The £4.4m project hit the headlines last year when Hackney Council announced plans to ditch the late C.L.R. James, a popular Afro-Trinidadian historian and journalist, from its name. Diane Abbott MP described the move as “an insult” to the author’s memory – he opened the previous Dalston library which bore his name – and 2,500 people signed a petition which helped reverse the decision.

“Opening a library at any time should be a huge cause for celebration, but to do so against a backdrop of cuts and quotas to library services elsewhere in the country — I think that makes it a fantastic achievement,” said Mayor Jules Pipe. “Libraries are about so much more than simply lending books, as incredibly valuable and important as that is. Libraries are at the very hearts of their communities. In difficult times, I think it’s more important than ever we remember exactly the kind of society we want to build.”

Poet John Hegley entertained the crowd, with Cllr Jonathan McShane acting as master of ceremonies.  “We’re just delighted it turned out how we wanted it to be, and you never know until it’s opened,” said Cllr McShane. “With any new project, until you open the doors, you don’t know if you’re giving people what they want, and the fact that twice, three times as many people as used the previous library are coming here shows we’ve done something right.”

Cllr McShane echoed Mayor Pipe, saying central government budget cuts have forced local councils to make difficult funding decisions, making the library’s opening an even greater victory as a result.  “It’s a very long process, and doing it at a time like now, when money is so tight and people are having to shut libraries in other places, the fact that we’ve gone ahead with it and it’s still just as ambitious as when we started planning it shows our commitment to libraries,” he said.

The event was one of several celebrating the library’s launch during the last week of February.