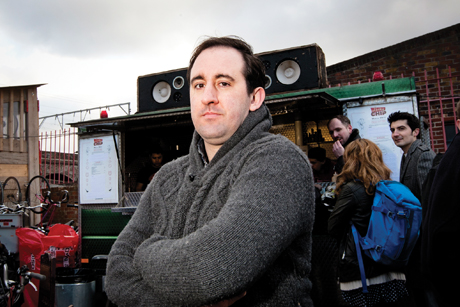 Ben Denner and his Lucky Chip cuisine can be found at Netil Market on Saturdays. Photograph: Hackney Citizen

From the streets of Cairo to a cathedral in London, 2011 was a year of revolutions and rebellions.

And, always evolving rapidly, the gastronomic world was not to be left behind. So for those of us with ever expanding waistlines, last year will be memorable as the year of the mobile food vendor.

Street food in less pretentious terms – a movement that can be traced to the beginning of the century and a cult surrounding a car park in Peckham and Yianni Papoustis’ hugely popular Meatwagon.

Many of today’s vendors are loosely organised under the ‘eat.st’ collective umbrella, and if London has become the heart of the British street food scene, Hackney is surely its pulse.

Check, courtesy of Lucky Chip, who are following in the Meatwagon’s footsteps, selling their delicious beef concoctions out of a van. Clean-off-the-bone ribs translated into a portable lunch?

Mark ‘The Ribman’ Gevaux will happily be your saviour if you venture to nearby Brick Lane on a Sunday.

Authentic wood-fired pizzas? Local wunderkinds Homeslice have it covered, or at least they did until their doughy end-of-year success led them to pursue pop-up opportunities further afield, including an exciting, in-the-works project on Portobello Road.

For Gevaux, in particular, 2011 was a fantastic year, with The Long Table night market in Dalston, the success of his ‘Holy Fuck’ hot sauce, and joining up with eat.st being particular highlights.

He puts the success of street food in Hackney down to the borough’s adventurous culture and relative affordability: “One of the reasons street food has thrived in Hackney and not Kensington is that I can’t see the people of Kensington sitting in a car park eating food next to a burning oil drum,” he says.

“They are missing out. Also, I should think the rents would price many of us out. I work on such a tight profit margin my prices would have to go up so much I would be embarrassed.”

The rise of quality street food in London is going a long way to countering popular misconceptions about American-style dining. As anyone who has ever sampled proper Yankee fare will tell you, it’s a far cry from what’s peddled at McDonald’s and TGI Friday’s.

Even the humble hot dog – usually linked to dodgy vendors in Leicester Square and even dodgier tummies – has experienced a renaissance on Old Street in the hands of the permanently cheerful Abiye and his gleaming Big Apple Hot Dog cart.

According to Pizza man George Whiting of Homeslice, Hackney’s creative spirit as an important factor in the rise of its street food scene: “Hackney has a young, creative culture at the moment and I think the street food culture mirrors that,” he says. “Not only does it give talented people an opportunity to do their own thing without breaking the bank, but it helps rejuvenate otherwise disused areas.”

Driven by the passion of people like Whiting and Gevaux, the future of street food looks bright indeed. A weekend stroll down another of 2011’s big success stories, Chatsworth Road market, showcases the full spectrum of local street eats: everything from the gourmet ethical offerings at Vegan Peasant to the warming pho and inspired fusion baguettes at longstanding Hackney favourites Bahnmi11.

The taste for street food is also spreading to the upper echelons of the culinary world. Upmarket City and West End steakhouse Hawksmoor not only serve Big Apple hot dogs in their restaurants, they recently traded suits for skinny jeans and set up shop at The Long Table in Dalston.  And Abiye’s hot dogs now feature at man-of-the-moment Russell Norman’s new joint, Mishkins.

Only a few years ago, this street food revolution seemed like the pipedream of a few madmen (and women) willing to take a punt on people deserting shady burger vans for a taste of the real deal. But happen it did. And perhaps, given that sherry has morphed from Nan’s afternoon pick-me-up into a hip tipple in the space of just twelve months, that’s not so surprising after all.

Homeslice – currently on leave, back in mid March (in between, found in King’s Cross, Brockley and soon Portobello)

To find some of Hackney – and London’s – best street food vendors all in one place, check out eat.st @ King’s Cross, most weeks (reopening 11th Jan) Wed-Fri, 10-3pm.

For the most current and accurate information on Hackney’s street food vendors and where they’re popping up next, follow them on Twitter: