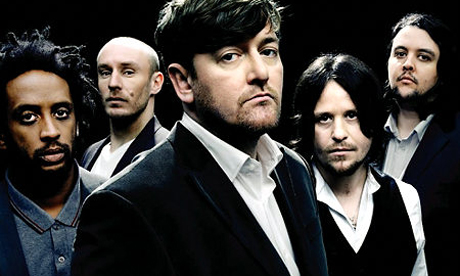 This article titled “BBC to mark 2012 Olympics with ‘biggest ever free live music event'” was written by John Plunkett, for guardian.co.uk on Thursday 24th November 2011 17.46 UTC

The BBC will mark next year’s Olympics with a star-studded Shakespeare season and three of the biggest music events of 2012 – along with a theme to its coverage of the London Games provided by the Mercury Music prize-winning band, Elbow.

The corporation’s contribution to the London 2012 Festival and Cultural Olympiad will span the Proms and the Radio 1 Hackney Weekend, billed as the BBC’s “biggest-ever free live music event”, along with a season of programmes about the capital.

Elbow’s specially-commissioned theme tune to accompany the BBC’s 2,500 hours of Olympics coverage is being kept closely under wraps, but will feature the BBC Philharmonic Orchestra and the London Community Gospel Choir and was described by the band as a “noble anthem”.

The season of programmes unveiled by the BBC on Thursday was described by its director general Mark Thompson as its biggest commitment to arts and culture in a single initiative.

It comes as the corporation looks to make £700m of savings and axe around 2,000 jobs as part of Thompson’s Delivering Quality First initiative following last year’s flat licence fee settlement.

But Thompson said the Olympiad fitted entirely in with the BBC’s future plans. “At the heart of DQF is that instead of spreading yourself too thin you focus investment on really big things that make a difference,” said the director general.

“The really big events feel bigger than ever before and are often getting a bigger audience than ever before. This is a gigantic gesture by the BBC, like a Russian military response, a vast army of people and writers and directors focusing on it.”

New adaptations of four of Shakespeare’s history plays will feature The Hour star Ben Whishaw as Richard II and Jeremy Irons as Henry IV, while John Hurt and Julie Walters will appear in Henry V. The adaptations, part of a BBC season of programmes about Shakespeare across TV and radio, will also star Patrick Stewart, Lindsay Duncan and Maxine Peak.

Co-executive producer Pippa Harris, of production company Neal Street, said: “We want them in some senses to feel like a mini-series. Shakespeare wrote them to run together and we want viewers to be able to look at that great big chunk of British history as a piece.”

The BBC Proms will feature a performance of Beethoven’s Ninth Symphony on the opening day of the Olympics, while a season of programmes celebrating London will include a new film by director Julien Temple. There will also be TV documentaries about David Hockney, Lucian Freud and Anish Kapoor.

Tinie Tempah and Florence and the Machine are the latest acts to be confirmed for the free Hackney Marshes concert in June, alongside Leona Lewis and Plan B. With an anticipated sell-out crowd of 100,000 people, and with the Glastonbury music festival not taking place in 2012, it will be the biggest free concert the BBC has ever staged.

The BBC events will form part of the Cultural Olympiad, the £97m nationwide arts programme that will accompany next year’s games, including the London 2012 Festival which will run from June to September.

Elbow’s Olympics theme tune will debut in full on the games’ opening day, but glimpses of it will be heard during the BBC’s coverage of the 70-day Olympic torch relay.

Guy Garvey, frontman of the five-piece act from Bury who won the Mercury Prize in 2008 for their album The Seldom Seen Kid, said: “It’s called First Steps. Without giving too much away, it could be parents looking with pride at their kid walking for the first time, but it will also [relate to] those sort of hopes and aspirations and marvelling at what’s going on.”

Garvey, who is also a presenter on the BBC’s digital radio station 6 Music, added: “There’s part of you that thinks is everyone going to be sick of this by the end of the year, will it match up to what’s going on screen. It’s going to be soundtracking some incredibly intense personal moments.”

Next year promises to be a defining one for the BBC following the latest round of cuts, with huge outside broadcast events including the Queen’s Diamond Jubilee, the Euro 2012 football championships in Poland and Ukraine and, of course, the Olympics.

Roger Mosey, the BBC’s director of London 2012, said he hoped the BBC’s Olympics programming would “deliver something for everyone in 2012, even if you are not a core sports fan”.

“The biggest sporting event in our lifetime, the largest cultural festival ever held in the UK and the most extensive outside broadcast in the BBC’s history,” he added. “Sometimes we haven’t quite grasped as a nation just what’s coming at us.”

• To contact the MediaGuardian news desk email editor@mediaguardian.co.uk or phone 020 3353 3857. For all other inquiries please call the main Guardian switchboard on 020 3353 2000. If you are writing a comment for publication, please mark clearly “for publication”.