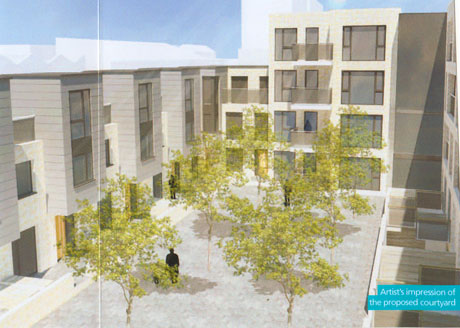 Local residents are up in arms as new plans are announced for a 10-storey high-rise block overlooking London Fields.

Following negative feedback on an initial proposal for a 19-storey block, Southern Housing Group have developed a new scheme, creating 58 new homes for 22-44 London Lane. The proposal outlines plans for between two and four storeys around the perimeter of the site and will include a 10 storey tower on the corner.

This scheme is still at pre-planning stage, and Southern Housing Group will be holding a public exhibition at City Edge, 125-127 Mare Street, E8, 3RH on Wednesday 8 June 2011, 3-8pm. The exhibition will provide an opportunity for local residents to view the latest revised scheme, discuss the proposals with the London Lane project team and give feedback.

Polly Richards of campaign group No Hackney High-Rise said: “The view of No Hackney High-Rise is that tower blocks are out of place in the residential streets surrounding London Fields that are typically low-rise (2, 3 and 4 storeys). If allowed by Hackney Council’s planning department, then this will make a mockery of the very idea of a ‘designated conservation area’ (which the site is in) and will raise the likelihood of a whole host of other tower blocks surrounding London Fields.”

A spokesperson from Southern Housing Group said: “Since the Group’s initial consultation in 2009 the project team has been working to respond to feedback from the local community.

“This has included substantially reducing the building height, by almost half, from 19 storeys to a maximum of 10 and reducing the number of new homes from 78 to 58. Southern Housing Group is undergoing further public consultation on the development and is talking to members of the community, including No Hackney High-Rise, about the revised proposal.”

Questions about the scheme can be directed to zara.hosford@localdialogue.com, tel: 020 7357 6606.