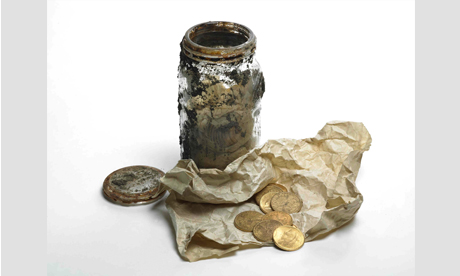 A hoard of gold coins found in Hackney by a local resident in 2007 does not qualify as treasure and should be returned to the descendent of the man who originally buried them, ruled an inquest last week (Monday 18 April).

In 2007, Hackney resident Terence Castle was digging a frog pond with three others in a back garden in Stamford Hill when they struck suddenly struck gold, discovering a glass jar containing 80 American coins dating from 1854 and worth around £100,000.

“I unwrapped the greaseproof paper the coins were wrapped in and saw the statues of liberty marching into my face in gold relief… I knew it was something special.” He took the coins to his office and contacted the British Museum. He insisted that they collect the coins because “otherwise I might have just run off to Rio with them.”

A treasure inquest was opened to determine the value and provenance of he coins. If coins less than 300 years old are gold or silver and appear to have been deliberately concealed, the law states that unless a superior claim is made the finder may receive a reward equal to the treasure’s value.

In a unique twist to the story a likely descendent of the original owner of the coins has been found. 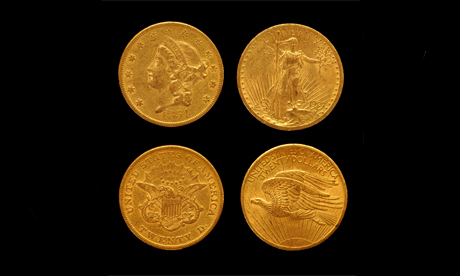 A claim was made by Max Sulzbacher whose father, Martin, was a German Jewish banker living in Frankfurt who fled persecution from the Nazis in 1938 and moved to live with his family in Hackney, bringing the valuable coins with him.

Martin Sulzbacher was interned as an ‘enemy alien refugee’ on the Isle of Man. He was then sent to Canada, but his ship was torpedoed by a U-boat off the Irish coast. Over half the passengers and crew perished, but Mr Sulzbacher survived only to be sent to Australia aboard the Dunera. Conditions on the Dunera were so appalling that several crew members were court-martialled.

Meanwhile, Sulzbacher’s family stayed on in Hackney. Fearing that German troops might invade and steal the gold from the safe in the City, they buried the coins in the garden. Unfortunately, the house took a direct hit from a bomb in 1941, killing all five family members.

Sulzbacher’s streak of bad luck continued when upon release in 1941 he was unable to find the coins among the rubble of the family home. He went on to open a bookshop in Stoke Newington and died in 1981.

The current case represents a second deposit of Martin Sulzbacher’s wealth. In 1952 as work commenced on a new building on the site of Mr Sulzbacher’s house, another hoard of 82 $20 American gold coins dating to 1890 was discovered in a glass jar on the same site. The hoard was awarded to Mr Martin Sulzbacher by the coroner at the time.

On 18 April 2011 the Coroner for Inner North London resumed an inquest in relation to a hoard of American gold dollars found in Hackney in 2007.

The coroner decided that Mr. Sulzbacher has a superior claim to the coins meaning that they will not qualify as Treasure according to the terms of the Treasure Act 1996, on the grounds that in order for objects to be classed as such, their owner or his or her heirs or successors must be unknown.

Mr. Martin Sulzbacher passed away in 1981 but the coroner’s office, the British Museum and the Museum of London worked together to track down his son, Mr. Max Sulzbacher, who lives abroad.

Drawing on evidence from the case where 82 similar coins found on the same property in 1952, Coroner Dr Andrew Reid ruled that the coins should be returned to the descendents of the family who buried them.

Reid stated that Mr Sulzbacher would consider offering a reward to the finders, but that he was under no obligation to do so.

It is believed that the coins were sent from America as part of the Dawes Plan to help Germany pay reparations after World War One. The Sulzbachers have donated a coin to the Museum of London and also to Hackney Museum.

Mr Max Sulzbacher said: “I am surprised but delighted by the recent discovery, which has come to light almost 70 years after the coins were buried. I am very grateful to the finders for reporting the coins to the Portable Antiquities Scheme and the Museum of London, and to the member of the public who alerted the coroner to the 1950s discovery.”

Mr Max Sulzbacher agreed to give an ex-gratia payment to the finders in recognition of their contribution to the discovery. It is anticipated that the remainder of the coins will be sold.

This represents the first time since the Treasure Act came into force in 1997 that an original owner or direct descendent has lain successful claim to an item that would otherwise have been ‘Treasure’ and the property of the Crown.

Dr Roger Bland, head of the department of Portable Antiquities and Treasure at the British Museum, said: “The case of the Hackney gold coins is one of the most unique and compelling stories that we have been involved with. There is an incredibly human element to this story that is absent from many archaeological finds and we are pleased to see the coins reunited with their original owners after so many years. The finders are to be congratulated for acting responsibly and helping to add further vital information to the corpus of material about the Second World War, Jewish immigration, and the history of Hackney borough.”

Archaeologists from the British Museum and University College London have investigated the site to ensure that no further deposits remained.