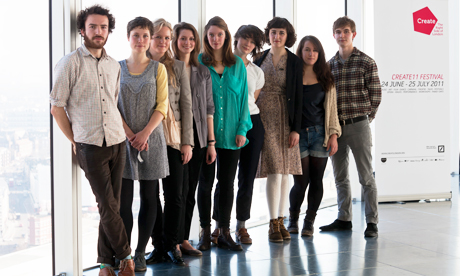 A group of East London artists, designers and architects has won a prestigious £40,000 award to create an artistic space beneath a derelict road in Hackney this summer.

The Bank of America Merrill Lynch CREATE Art Award was announced today (8 March) at the launch of CREATE11, an arts festival programme linked to the London 2012 Olympic Games.

The winning group, not for profit collective Assemble, came together last year to make a cinema or Cineroleum out of a disused petrol station on Clerkenwell Road.

Folly for a Flyover, the project for which they have won the award, will engage directly with Hackney’s industrial and cultural history. The materials used to construct the site will be sourced from across Hackney Wick, including refuse from the Olympic Park. They will be put together through a process known as ‘dry assembly’ which means they can be reused for other purposes later on.

The project has been developed in partnership with the Barbican and is to be linked to the Barbican’s Watch Me Move: The Animation Exhibition, which will run from 24 June to 24 July.

Folly for a Flyover will include a series of workshops, performance and film screenings at an as-yet-to-be-disclosed site in Hackney. The site will be developed with a view to possibly making it a permanent cultural space.

Working in collaboration with community groups including those involved in adventure playgrounds, puppetry, animation, food-foraging and other activities, Assemble will seek to integrate local residents into the project.

Commenting on winning the award, artist Amica Dall said, “Assemble is delighted to have been given the opportunity to reclaim a disused site in Hackney for cultural use, and we are very excited about working with local residents and communities groups across in the five East London boroughs in the coming months. We want this project to demonstrate the possibility of permanent re-use of this site, and of other pieces of neglected urban space and redundant public infrastructure.”

Hackney Cabinet Member for Regeneration and the 2012 Olympics and Paralympic Games, Cllr Guy Nicholson, said: “Through CREATE we can showcase the extraordinary concentration of creativity that is found in east London and bring about the largest participatory arts led festival in the UK.”

Rena Desisto, global arts and heritage executive, Bank of America Merrill Lynch, said: “The Art Award is an exemplary community project, successfully providing free access to arts projects for local East and South East London communities. Assemble’s work is just one example of the broad range of artistic talent in the host boroughs and helps to firmly place the region at the heart of London’s cultural map.”