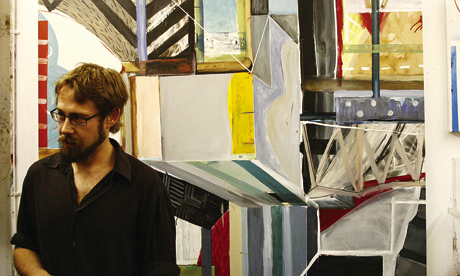 Artist Francisco Ortega with one of his canvases

Originally born in Spain, artist Francisco Ortega has lived in Hackney since moving to London seven years ago. So far, he has enjoyed both international and local success at the 2010 Hackney WickED festival, which attracted thousands of people to his studio.

Ortega studied art in Seville and first earned his living through commissions for portraits and landscapes. It was during this period that he realised he was looking for the chance to develop his own style of painting.

Says Ortega: “The driving force behind my work is a desire to explore the unique expressive properties of paint. Working in both abstract and simplified representational art, my work is as much about the process as it is about the finished product.”

The enigmatic canvasses are rich in symbolism and cultural references.

“The themes my work is mainly based on are connections, contradictions and dilemmas. I am interested in fragmented or partially distorted compositions, abstract and layered elements, which lead us to an unfinished state and never-ending process”, he says.
While he considers London to be a city with great potential and talented people, Ortega laments the difficulties in finding affordable studios for artists. Often a studio rent is more expensive than a residential let, he claims.

Ortega fears that as a result of these rent rises, up-and-coming talent may end up moving to Berlin or Lisbon in search of affordable spaces, which could be detrimental to the London art scene.

Ortega is also critical of galleries that make money through was he sees as the exploitation of artists: “There are some galleries that instead of looking for talented people and promoting them, what they do is rent a piece of wall.”

He says artists may pay around £500 for three metres of wall space in a two-week exhibition regardless of whether they have anything special or interesting to say. Ortega laments the fact that this arrangement has the potential to cheat the public, who may think they will be visiting a gallery to witness talent.

Despite this, Ortega is positive that there is plenty of cause to celebrate when it comes to the organising of festivals where artists are able to show their work freely to curators, art dealers, and art lovers.

He is currently most excited about showcasing again at the Hackney WickED festival later this year, which he predicts will become “the next big thing in British art after the Frieze.”

Curated by Maylee Ann Jhonnes, Ortega’s next exhibition is inspired by a theatre piece about two skeletons.

Further details will be made available shortly on Francisco Ortega’s website.

← Trash Kit: the art of noiseScamp, and Rain on the Pavements – reviews →