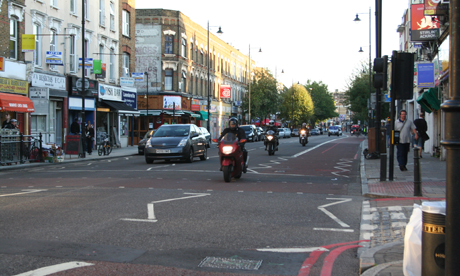 The long-running debate over the Stoke Newington one-way system remains unresolved. Many local residents have been campaigning for a return to a two-way arrangement.

Earlier this year, London Assembly Member Jennette Arnold quizzed Boris Johnson at Mayor’s Question Time as to whether he would support such a move. Mayor Johnson stated that: “the removal of the gyratory working at Stoke Newington would result in some significant adverse impacts, such as the loss of local parking facilities, diverted traffic and bus delays. These concerns, allied to the absence of project funding, means that TfL [Transfort for London] is not actively pursuing two-way working for the Stoke Newington Gyratory.”

Notwithstanding, Hackney Council has opened a public consultation on the Stoke Newington one-way system.

A local residents’ association is questioning whether reverting back to two-way traffic will necessarily cure all the area’s traffic ills. In an open letter, Jim Westwood, chair of the Leswin Area Residents Association (LARA), says: “Whichever traffic system we end up with, the problems our children, elderly and disabled residents face in crossing Stoke Newington High Street and other roads will not disappear.”

The letter goes on to say that LARA members do not, therefore, see the retaining or abolition of the gyratory system as their main priority.

“What they do see as their main priority is taming the roads around the gyratory to make them safer and more pedestrian and cyclist friendly, and improving the environment and safety of the gyratory’s internal streets,” the letter continues.

Mr Westwood points out that that the issue of whether to stay with or reverse the one-way system is a complex one that could drag on for a long time, and that in the meantime there are still cars racing at high speeds along Rectory Road, Stoke Newington High Street and Evering Road, with no deterrents in place to stop them.

The gyratory traffic system consists of a network of clockwise one-way roads including Stoke Newington High Street, part of Rectory Road, the western ends of Brooke Road and Northwold Road, Manse Road, and the western end of Evering Road.

There has long been opposition to the system, which is perceived by some to cause congestion, speeding and “rat running” along parallel streets, and businesses on Stoke Newington High Street who say it has a bad effect on trade. The public consultation runs until 10 January 2011.

Residents are encouraged to have their say by completing the council’s survey on the Stoke Newington one-way system before Monday 10 January 2011.

Note: this story was amended at 11.28am Sunday 14 November 2010 to provide historical context.

Related opinion piece: The only way is two-way in Stoke Newington