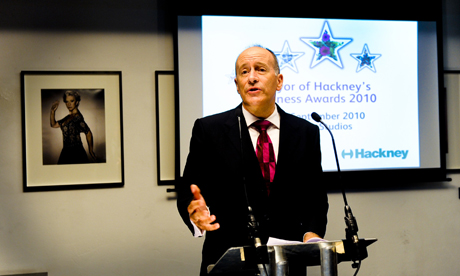 The Mayor’s choice of Hackney entrepreneurs was celebrated this week (Tuesday 14 September) at a reception held for the winners and finalists of the Mayor of Hackney’s Business Awards 2010.

The council says that the annual awards, which are now in their fifth year, are “dedicated to recognising and celebrating the excellence and diversity of businesses in the borough.”

A team of  judges from the world of business and media joined the Mayor of Hackney, Jules Pipe, in presenting awards to the local entrepreneurs at Holborn Studios, who hosted the event and sponsored one of the categories.

Jules Pipe, Mayor of Hackney, said: “These awards are about celebrating excellence. They are also about recognising the outstanding contribution that local businesses make to Hackney’s economy. The entries for this year’s awards showed again the amazing diversity in the borough’s business sector and I congratulate all the winners and shortlisted nominees for their entrepreneurial success.”

However, one of the categories for the 2010 awards – the “Best Disabled” category – went missing. It appeared in the literature the council released to applicants but had managed to inexplicably vanish by the time the winners were announced this week.

The Citizen asked the council for an explanation of disappearance. We received a reply telling us that there had not been enough nominations for a shortlist to be drawn up for this category.

Even among those categories that did attract entrants, some attracted so few that any business that entered had a 50/50 chance of being shortlisted (the “Best in the Business” category, for example, drew only six entries, of which three were shortlisted).

Whilst the council claims it is keen to promote “diversity”, the “Best Ethnic Minority” and “Best Women’s Business” categories, which were on the slate in previous years, were not included this time around. Asked to comment on this, a council spokesperson said: “In light of feedback from local businesses who had told us that they felt many of the categories were not relevant to them…we changed the categories”.

The Mayor handed out awards to the winners with entrepreneur and business mentor Rachel Elnaugh, one of the original ‘dragons’ on the BBC’s Dragons’ Den and founder of Red Letter Days.

She said: “It’s great to be part of enterprise events like this.  Because of Dragons’ Den there’s a whole new spirit of enterprise, and that’s what we need to build the economy.  What’s great about these awards is that they are a good way to encourage local businesses.”

Joining the Mayor on the judging panel were: Sinclair Beecham MBE, co-founder of Pret a Manger and owner of the Hoxton Hotel; Ian King, Deputy Business Editor of The Times and Hackney resident; Yvonne Thompson CBE, one of the founders of Choice FM; and Dave Blake, Publishing Director at newspaper group Archant London, which publishes the Hackney Gazette.

The sponsors were: The Co-operative Bank, GLL, Groundwork and Holborn Studios.

Best Leisure or Entertainment Business, sponsored by GLL:
Boulevard Catering & Events – offering bespoke full-service catering and events solutions to a wide range of clients. They have also worked with Hackney Recruitment Partnership and Inspire to offer work placements to adults and young people.

Best Social Enterprise, sponsored by The Co-operative Bank:
Renaisi Ltd – One of the country’s leading social enterprises specialising in neighbourhood regeneration and the delivery of local public services.

Best in the Business:
HCT Group – founded in 1982 to provide affordable community transport services for the use of local voluntary organisations, charities and community groups, it has now expanded to run six red bus routes for TFL, as well as bus routes outside of London and a highly successful training programme.