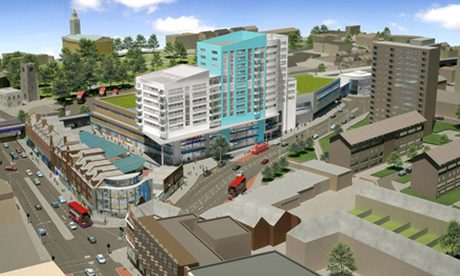 The development that Tesco said will be a 'new dawn'

Plans for a new mega Tesco in Hackney Central have been rejected by the Council.

Building conservationists had feared the development would damage views from the historic churchyard of St John at Hackney, which lies behind St Augustine’s Tower in a conservation area.

In spring 2009, Hackney Historic Buildings Trust trustee Laurie Elks told the Citizen: “The proposals are a massive development that will enclose and change the character of a green lung and a very special place in the heart of Hackney.”

Rev. Rob Wickham, the Rector of Hackney, had also expressed concern about the plans, saying the development would block light to the churchyard.

Tesco was intending to build the development in conjunction with Spenhill, its housing subsidiary.

The company argued it should be applauded for bringing forward new development in a tough financial climate.

The proposals, described by the council as a “major large-scale planning application”, would have involved the demolition of several buildings in Mare Street.

As of spring 2009, supporting “opportunities for tall buildings” was an objective of the Council’s Hackney Central Action Plan.

← Ben Eine: the art of the StatesTram shed campaigners fight on →