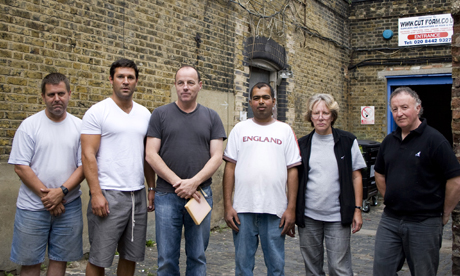 The local Leabridge ward councillors are now considering legal action to address alleged widespread irregularities, amid public dismay over what are seen as the Council’s planning priorities in the run-up to the Olympics.

“We believe the process leading up to this submission to the committee is so flawed; the hearing should have been suspended while it is investigated,” said Cllr Ian Rathbone, speaking on behalf of all three Leabridge ward councillors.

“We say to all our colleagues who sit on planning committees – come and see what a mess your decisions have made of Clapton,” he added.

“Picture it happening in your ward and… how your residents would be feeling about such destruction… of their environment.”

In fact, Council planners and committee members did visit the tram depot. According to tenants, after being briefly shown around the main yard by the developer, they left without speaking to any of them.

“We were [effectively] silenced,” said a long-term depot resident who wished to remain anonymous.

A Council spokesperson said: “We are satisfied the committee has fully met the statutory procedures and protocols, which help determine a planning application.

“The purpose of the visit was for the chair and two committee members to gain an impression and understanding of the site in question and its surrounding area.

“As with all planning applications, the Council conducted a thorough public consultation. In this case, we consulted with more than 750 properties in the surrounding area, which included Beecholme Estate and tenants in the depot.

“As a result of our public consultation, the development will include the part retention and renovation of the main tram shed building.”

Residents of the neighbouring estate also claim they were not consulted and now stand to lose their designated community hall to the project. The new planned community hall would be shared with the new buildings.

“The application was pushed through behind our backs,” said David White, secretary of Beecholme and Casimir Tenants’ and Residents’ Association. “It’s been our hall for 40 years, we want it to remain ours.”

The developers Upper Clapton LLP have no legal obligation to consult all interested parties and letters were sent to all legal tenants.

An Upper Clapton LLP spokesman said they are pleased with the planning committee’s decision and are working with Transport for London (TfL) and the council to resolve the necessary details.

However, Beecholme TRA are resting their hopes on TfL, which is yet to grant its final approval for parking and roads at the new site; and Hackney Homes, which manages the community hall.

The Clapton tram depot was built in 1873 and according to its resident and professional conservator Jonathan Kemp it is the only surviving horse-drawn tram complex in Britain outside Sheffield. At its height the depot housed around 600 horses.

The depot was left vulnerable to development after in 2005 English Heritage chose not to list the site owing to insufficient historical interest and structural alterations. According to local specialists, however, the review process was highly inadequate.

“The conservation officers haven’t really taken into account the size of the site. They just thought it was a car showroom and artist studios,” said Mr Kemp.

The hundreds of objections raised against the conversion of the depot into office space and 90 apartments ranged from traffic congestion to pressure on services. But to the people we spoke with the overarching concern was employment.

The depot is fully occupied and provides stable work for 58 people, rising to 75-100 if casual and part-time labour is included.

Given that the new site is expected to employ 68 people, a planning officer said at the committee meeting “the net loss of employment is acceptable.”

The qualitative trade-off between losing manufacturing jobs employing local residents in favour of flexible office units available elsewhere has evidently not been considered by the planners.

“The fact that the proposed development will result in the destruction of the livelihood of circa 70 people in the middle of the worst recession in living memory…is apparently of no concern to Hackney Council,” said Ms Lafferty.

Terrence Bates, owner of Cut Foam manufacturing business and the largest employer in the depot, was planning to recruit more workers to support his firm’s expansion.

The uncertainty over the site’s future has put these plans on hold.

Like most other tenants, Mr Bates is yet to hear directly from the depot owner and developer Shawn Meadows.

Some businesses are already resigned to the planning decision.

“The last thing I want is to stop somebody from making money,” said furniture maker Noel Hoff, who spent 15 years at the depot. “If they treat me right, I go.”

Endorsing the depot conversion at the meeting, a council officer said the developer has shown a genuine desire to keep the existing employers in the retained portion of the main shed.

To the workers this is a travesty. They say the new space next to residential flats would be completely inadequate for their noisy, fumes-emitting light industrial businesses.

“The moment the last person goes they can knock it down,” said one tenant.

Nearly all businesses and artists say they would struggle to stay in Hackney if forced to leave.

“Our customers come to see the job before it goes out,” said Jeff Hertcz of bespoke carpenters Furniture Designs, who has been in the depot for 12 years. “If it’s too far, it would affect our business.”

Likewise, young artist Anna Stephens said she was only able to open her gallery Vulpes Vulpes because she found the space at the depot.

Mr Bates of Cut Foam says by destroying artistic space, the council is overlooking the best way of regenerating Clapton’s former ‘Murder Mile’. “They are actually neglecting what makes Hackney such a wonderful place.”

More information on the campaign here