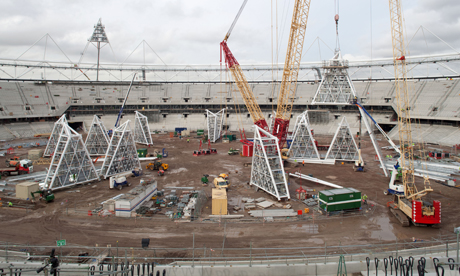 View of the second lighting tower being lifted into place in the Olympic Stadium Photo: Steve Bates. © ODA 2008

After discovering that only one apprentice working on the Olympics site comes from Hackney, local MP Diane Abbott has called on the Olympic Delivery Authority (ODA) to address the low numbers of apprentices on the Olympic site as a matter of urgency.

Diane led a debate yesterday afternoon in Westminster Hall on Employment on the London 2012 site, where Tessa Jowell MP, Minister of State for the Olympics, echoed her concerns about a lack of jobs going to people living in the Olympic boroughs.

She also visited the Olympic site in Stratford this morning where she received a briefing on employment from Lorraine Martins, the ODA’s Head of Employment, Skills, Equality and Inclusion.

The ODA hopes to increase this number to 350 but confirmed many will not be able to finish their training on the Olympic site because there simply isn’t time before 2012.

Diane said this afternoon: “I was shocked to find out today as part of my research for a debate that I called this afternoon, that out of 150 apprentices currently on the Olympic Park, only one is from Hackney.

“This is a disgrace. Apprenticeships in construction and other skilled trades are exactly the lifeline that many young people in Hackney and elsewhere in the East End are calling out for. It’s nonsense to say that there’s only one person in Hackney who wants or needs to benefit from being a construction apprentice.

“The shocking figures for employment and apprentices show how heartless the ODA is. It pays lip service to local jobs for local people but in reality it’s falling short.

“Furthermore, of the apprentices that will be employed on the Olympic site, many of them will not be able to complete their training because it takes three years for a construction apprenticeship and there are only eighteen months of construction activity left to go.

“There are so many highly paid officers working for the ODA on these issues, that I am shocked that the number of East End young people gaining access to these apprenticeships is so low. I call on the ODA to address this issue as a matter of urgency.”