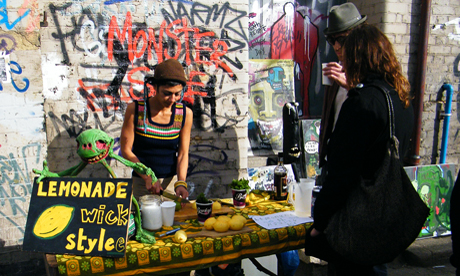 When Vinyl Pimp moved the Flea Market from the Oslo House car park to White Post lane he had arranged to procure electricity from the Elevator Gallery.

However, on Sunday his contact from the gallery was not answering his phone.  Determined to provide power, he knocked on one of the adjacent doors.

The artist who answered the door was very obliging; she had just been constructing a gymnastic horse from 30,000 razor blades.

She led Vinyl Pimp past her current project, through a collection of medicine balls and to the window, from which he lowered an extension cord three stories below and co-ordinated power sources amongst the stall-holders in the street.

White Post Lane is a dead end road leading through industrial estates, past a junkyard and a brick works, past the fenced in garages storing metal rainbows of car fenders on their roofs and the prison like Mr. Bagel factory puffing the odour of warm wheat.

This roadway had led to the old the Hackney Wick Stadium where the infamous flea market held court for seven years, until 2003, when the stadium was demolished to support London’s Olympic bid.

Vinyl Pimp never saw the original market – only Steven Gill’s book of photographs of it.“I heard that people used to travel all the way from the North, I mean from Scotland, just to come to that market.  I just thought it would be a good idea to have something like it again.”

He recruited participants with a Facebook group and posters around the area.  The first ‘new’ market, held in May 2009 in the Oslo House parking lot, attracted about 70 expressions of interest.

“A lot more people apply than actually show up.  You can really tell someone’s character by what they write in their emails.  Some people write really simple one liners – like ‘I sell shoes’, and others get really elaborate, send pictures, website links….”

After the first market’s popularity, Vinyl Pimp decided that it would be best to move the stalls away from the residents. Held monthly since last spring, the market has an average turn out of between 30-40 stalls.

Because of the plentiful industrial buildings and the consequently high concentration of art studios, the market is a convenient platform for artists selling original paintings and drawings, costume shop cast-offs, handmade jewellery, video art and other original creations.

Most sellers are locally based, bringing their unwanted stashes of clothes, books, DVDs, and music curb-side.  From what’s on offer it is obvious that the area is populated by people with eccentric tastes – a pillow in the shape of a Japanese schoolgirl, life-size and only from the waist down, went for £10.

The market attracts about 300 browsers who check out the wares of the 30-40 stalls, and enjoy the party-like atmosphere.

Music acts, from folk to experimental jazz and house/dub/techno DJs, have provided atmosphere on different market days.  One performer sold hula-hoops, entertaining with her elaborate demonstrations.

“At one market there were several fortune tellers with Crystal Balls.   I thought it was strange.   It wasn’t very popular… and then to have competition!  But they left pretty quickly.  We’ve also had Thai Massage.”

Clothes, art, performance, massage and divination – what else could a market need? Food, of course – and it is home made and fresh.

“There was one girl who made this delicious sushi.  It was so popular that she sold out right away.  So then she ran upstairs to her house and baked a bunch of brownies.  She made loads of money!”

Katie, a connoisseur of cakes chimes in, “ You can’t really get anything else like it around here.  There are no local retailers selling these kind of things.”

At the third flea market there was a cake contest, judged by the Head Chef at St.John Spitalfields, with prizes for prettiest, ugliest and best-tasting cake.

Katie, the winner of both prettiest (for her cheesecake with cherry balsamic glaze) and ugliest (for her gingerbread apricot) was given a gift certificate, donated by the Pavilion Café in Victoria Park.  Ash, another Wick resident, won the grand prize of a dinner at St. John in Spitalfields with his simple cheesecake.

← The Shoreditch TalesTurning on the Tap →