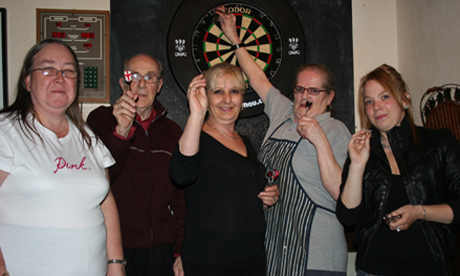 The area around Lauriston Road in Hackney is an estate agent’s dream. Right next to the 218 acres of open green that is Victoria Park, ‘Victoria Park Village’ conjures up the kind of romantic images that attract the young and upwardly mobile.

As a result, the look of the high streets has changed considerably over the last few years. Recent additions to the area include independent fashion boutiques and the type of pub that serves pitted olives, Bavarian Weissbier and organic cider.

Therefore, situated in the heart of the village on Victoria Park Road, and with a name that suggests it should be the focal watering hole in the area, it is with some irony that the Village Tap is unlikely to be the pub of choice for the area’s new residents. However, having adopted the ‘village’ prefix long before the influx of the moneyed crowd, the Tap remains the favoured destination for many.

“We’re the locals’ local”, according to the landlord, and it’s a sentiment that’s shared by those drinking inside. And they’re not lying. One of the first things you notice about the Village Tap is that pretty much everyone knows everyone else.

Such is the familiarity of the management with the drinkers that customers have worked part-time shifts behind the bar and when the Guinness runs dry a call to change the barrel is put to those sat closest.

In fact, the Tap is like the kind of fictional pub that you see on television but don’t believe exists in real life. The landlord Michael Kavanagh (“but everyone calls me Pete”) likens the Tap to Emmerdale, Eastenders and Coronation Street rolled into one.

It clearly does provide a social hub for its regulars, and for those that doubt the authenticity of Albert Square’s Queen Vic then this is proof that such a place still exists.

Deano lives around the corner and has been going to the Tap for around 20 years. “It’s like an old East End boozer, that’s why I like it”. Indeed. The decor is simple and functional. The range of beers available is limited to the more commercial household brands, and wine is sold in single-serve individual bottles.

Similarly, the bars snacks are classic pub fare: crisps, nuts and pork scratchings – certainly no olives. “It is what it is”, and that is just what the regulars want. Clearly, the Tap has something that its customers feel they can’t get from the newer pubs in the area. “You can relax, talk to each other, have a nice couple of pints and go home”.

On Thursday nights, the attention switches to the back of the pub, where a large electronic scoreboard is mounted next to a darts board. The Tap has two darts teams that play in a local league, and with one team having an away fixture the other awaits their opponents. A free spread of sandwiches and sausage rolls will feed both sets of players.

In between warm-up throws, team captain Sylvia Smith explains why she has been coming to the Tap for the last five years. “It’s friendly, and there’s a real community spirit. If people don’t see you for a few days they’ll phone you up and ask if you’re okay”.

It would be easy to suggest that the ‘community’ in question is made up of the more elderly and mature, but the Tap is no dowdy old man’s pub.

Sylvia’s daughter Lindsay Jones is 18 years old, and as well as joining her mum on the darts team she also shares her feelings about the pub. “It’s got a good atmosphere, and everyone looks out for everyone else.”

Although the majority of the regulars are not Lindsay’s age she clearly enjoys the benefits of essentially having several uncles and aunts to watch out for her, and what she likes about the Tap is that “it’s like a family”. In fact, testament to that family atmosphere is that Sylvia and Lindsay are not the only parent/child combination in the darts team.

Although it is clear that the regulars enjoy the Tap just the way it is, the pub trade is going through challenging times and landlord Pete is more than aware of the need to attract new customers. He rattles off a number of pubs that have closed down in the local area in recent years, and predicts that at least two more will be forced out of business in the new year.

He accepts that tastes are changing and that there is a need to modernise. For his part, there are two large screens that show Sky Sports, weekly quiz nights and other social events and the smoking area in the beer garden is covered. A hot food selection including paninis, chips and toasted sandwiches will soon be available, and wi-fi is even a possibility.

There’s no doubt that the area along Victoria Park Road has changed considerably. Matriarchal figure Georgina Colbert has lived in Hackney for 48 years, has been going to the Tap for over 20 years, and has worked behind the bar there for the last seven.

She has seen how different shops have come and gone, and is convinced that the Village Tap will continue to prove a favourite destination for many for several years to come. Why? “Because it’s a local pub and everyone gets on”.

← Hackney Wick Market is backMake yourself at eco home →