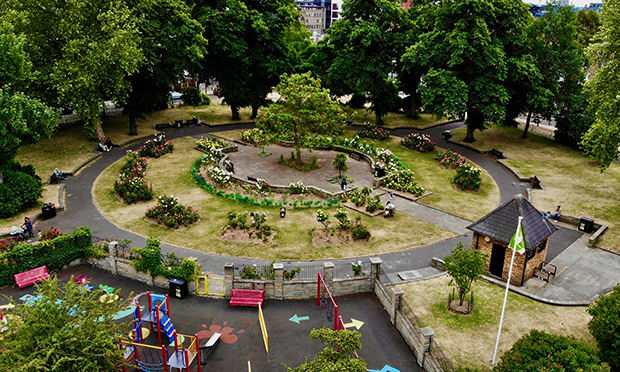 Children from a De Beauvoir primary school are fighting for the right to have playtime in a council park.

Pupils at Hackney New Primary School want local residents who complained about them using De Beauvoir Square to understand that they do not want to cause a disturbance.

They staged an after-school protest in the square recently and were joined by politicians from several parties who came along to hear their views.

The problem arose after a complaint that the Downham Road school had  “taken over a public space as if it were their own private space” by using the park for supervised playtime for Year 3s and Year 5s in two 20-minute slots.

The unnamed resident said they feel the school has “been treating De Beauvoir Square as its own territory”.

They said they were not opposed to children playing but they are against the school using the square as a “long-term solution”.

The school has a small playground and a rooftop garden.

Other people also complained to the school, which has stopped using the park.

Parents said it is too far to go to Snake Park across the busy Kingsland Road for such a short break time.

Cllr Caroline Woodley, Hackney council’s cabinet member for families, early years and play, told the children: “You do have a right to play. We want to be a child-friendly borough.”

She added: “I really hope that we can work something out.”

The Labour councillor said it was also essential to “make sure that it is still accessible for everybody”.

Ten-year-old Nil said: “We have a long school day from 8.45am to 4pm and some people do not have gardens or apartments.

“We do have a playground, but it’s not as big as other playgrounds.”

She added: “It is our local park and we have a basic right to play.”

Sara, who is nine, said: “We do skipping or talk or play hopscotch or ball games. We are allowed to sit in the shade and read.”

She added: “We are kids and we need fresh air.”

Oskar, 10, explained: “It’s a lovely atmosphere with all the greenery.”

The children said they have to walk to the park in silence from their school, which is less than five minutes away, for the 20-minute break.

Parents said there have been no complaints about noise or behaviour.

The Eko Trust-run school has been approached for comment.

Families are also campaigning for a school street or traffic-calming measures such as segregated bike lanes or more planting on Downham Road.

Tyrone Scott, who is standing in the 7 July by-election in De Beauvoir for the Green party, said: “I will reach out to discover their concerns. I fully support children needing access to green space and fresh air.”

He added: “Talking to the children, they felt that they were being punished and had done something wrong.

“I really hope there’s a solution which is best for the community.”

She said: “Hackney parks are for public use and the alternative for the children is to play inside.

“With children spending more and more time on screens, outdoor play is key to supporting not just physical development but also mental wellbeing.”

Labour candidate Joe Walker said: “Children always have the right to play in a public park such as De Beauvoir Square.

“Public spaces are for the whole community and the children of Hackney New School are an important part of the local community.

“It’s important to stress that it would only become an issue for the council and the parks team if the children’s use of the park was preventing others, such as local residents, from using and enjoying the space themselves.”

He said it is also important to take on board the views of the residents who raised concerns and bring them together with the school to find a solution.

Thrusie Maurseth-Cahill, by-election hopeful for the Liberal Democrats, said: “It is really important that children get the opportunity to enjoy our green spaces.

“As a councillor I would want to consult actively to ensure that all of the groups who make use of the Square can explain any concerns.

“I am sure that together we can work with residents, the school and parents so children can enjoy clean, safe green spaces in the heart of De Beauvoir. ”

The other by-election candidates have been approached for comment.

← ‘They are so beautiful’: Delight in Hackney as two sculptures are unveiled outside the Town Hall to mark Windrush DayPolice investigating string of sexual assaults in Hackney Marshes make third arrest →