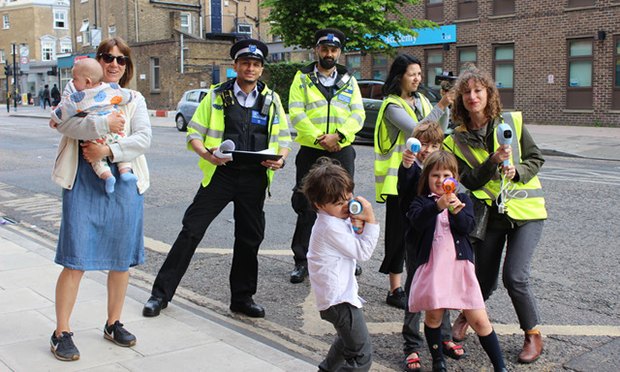 Schoolchildren joined police in measuring how fast motorists drive past their primary school in the Community Roadwatch as part of a nationwide series Streets for Kids events.

In all, police issued seven penalty notices to drivers after the speed check event outside Hackney New Primary School on Downham Road in De Beauvoir.

It’s the second after-school speedwatch event of its kind and overall 20 tickets were dished out.

It comes ahead of a Kidical Mass UK bike ride in London this weekend.

Parents said: “It’s unsafe, parents cycle with their children but then have to walk bikes on the pavement which takes up room from pedestrians; there are no bike racks outside school near the gates.”

The school’s Parents’ Air Quality and Road Safety Group want to see Enfield Road become a School Street. It would mean motor traffic would not be able to use the road at the start and end of the school day.

School Streets are designed to cut air quality and boost greener transport on the school run, so parents are more confident for their children to walk or cycle to their lessons.

Parents said there have been near misses and are concerned about the safety of their children. They said there have even been cars and vans drawn up on to the pavement. They also want a filter on Downham Road.

They lobbied the council about road safety last year and plan to talk to it again this summer.

It comes as the London Assembly revealed that the school run accounted for 30 per cent of the peak hour traffic in Hackney between 2017 and 2020.

They are also lobbying Hackney Council to create a protected cycle lane so children can cycle to school.

They said the council “needs to act now and create a School Street and drastically reduce traffic on Downham Road, preferably by filtering it ASAP or adding a safe separate bike lane.”

Parent Frances Cherry said: “Children are really aware of the situation and the dangers. They have junior road watch officers in school.”

She added: “People are put off cycling because the road is so horrible.”

Pollution levels recorded by a monitor at the school exceed World Health Organisation recommendations, she said.

There are 40 Transport for London-funded School Streets with a further eight experimental schemes in the borough.

In a statement, the council said: “The schemes tackle congestion and improve air quality at the school gates, making it easier and safer to walk and cycle to school.

“They create a more pleasant environment for everyone, while making sure residents, businesses, pedestrians and cyclists can still use the road.”

It is also looking at changes to Downham Road – which could include build outs – and would hold a consultation to hear from road users.