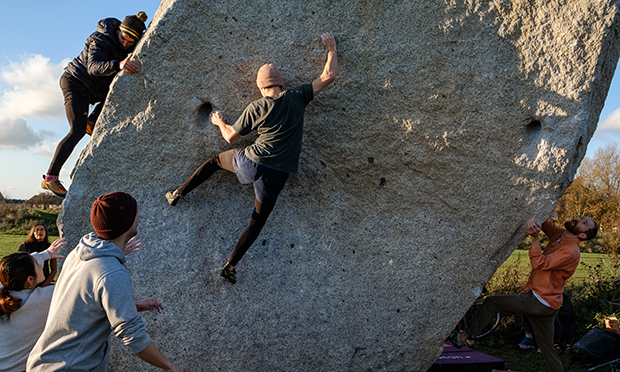 Over the past two years, we’ve often been obliged to make do with what’s around us, and sometimes that has led us to unexpected places.

Benjamin Hughes’s photo essay on his encounters with the Mabley Green Boulder is one such tale.

From one angle, the chunk of Cornish granite that sits on Homerton’s eastern fringe looks as if it has been there for millennia. But from another perspective, human intervention is evident in the dynamite marks that spike its side.

In reality, the rock is one half of a sculpture entitled ‘Boulder’ by artist John Frankland (the other half graces Shoreditch Park). The four-meter- high work was erected in 2008 and has stood stoically ever since as footballers, dogwalkers and frisbee throwers have meandered about it. 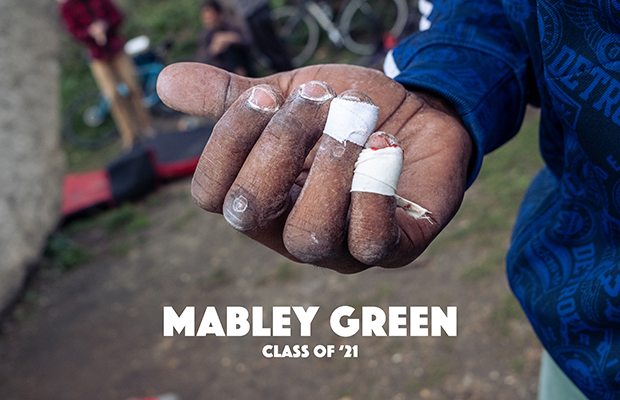 Early in 2020, Ben Hughes decided to put it to another use: he reinvented the monolith as his own personal climbing school.

It turns out that others had the same idea, and before long a stream of occasional visitors became a social network that helped each other through the darkest days of the pandemic.

The venue eventually drew devotees from far and wide, making the ascent with all levels of skill but sharing the common circumstance of limited lockdown recreational options.

In his day job Ben is a photographer, so he decided to document his experiences as he went along. The result is a self-published volume entitled Mabley Green Class of ’21, a 52-page book of images and text that tells the story of how a small community of Londoners formed, honing (or learning) the art of rock-climbing on the plains of Homerton.

And so the Boulder found a new life, having been hewn out of Cornwall, and made into art in London, it became, as Hughes says, “a rock for someone who really needs a rock”.