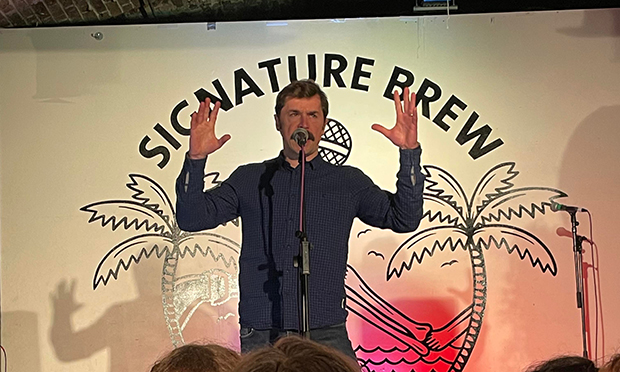 Nestled away in the arches next to Regent’s Canal, a mere stone’s throw from Haggerston Station, is much-loved watering hole, Signature Brew.

Famed for its off-the-wall tipples and picturesque waterside location, the bar doubles as a venue for the best of local music, movie screenings and, at times, a go-to destination for up-and-coming comedy.

Objectively Funny, opened by the ever-original Mike Wozniak and featuring a mix of new talent and household names, was one such night, with the likes of Athena Kugblenu and Josh Weller contributing to an eclectic night.

The first comic to grace the stage, Wozniak delivered a riveting and complex wartime story of how his grandmother travelled to Luton from Poland around the time of the Nazi occupation. Wozniak is known for his narrative, deliberate style of comedy, interspersed with brief moments of audience interaction, and this was an entertaining set.

The equally memorable but altogether different Athena Kugblenu had the audience in stitches with her astute comment on class culture in the UK and growing up in north London.

The up-and-comers gracing the stage were more than capable of keeping up with their heavyweight counterparts – with one notable comic taking even the MC by surprise. Wearing an oversized heart-shaped chastity belt, the comedian took to the stage to declare in aggrandised tones how hideous the entire audience was – before being ‘struck’ by Cupid’s arrow an obscene number of times and falling in love with audience members at random, and later stripping off to leave nothing but a tiny pair of briefs and a rather suggestive accessory hanging from them.

Aside from this strangely enjoyable segment, Objectively Funny more or less does what it sets out to do – provide reliable comedy and give a platform to new performers in unique and exciting venues.

For more, head to signaturebrew.co.uk.