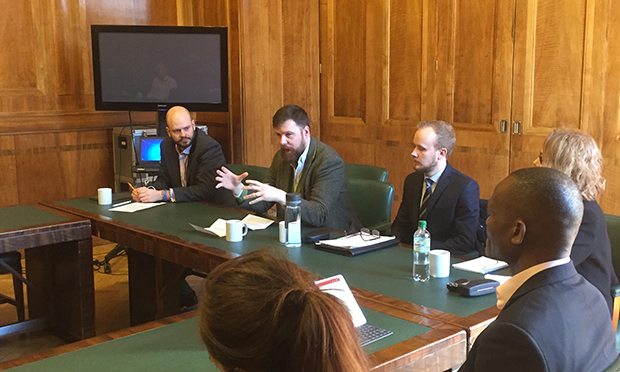 Hackney’s energy boss is to go on the road with a plan to unite London’s local authorities of all political makeups and use their purchasing power to “move markets”.

Cllr Jon Burke (Lab, Woodberry Down), cabinet member for energy, sustainability and community services, held a roundtable event on 30 January with reps from other Town Halls, as well as the London Energy Project.

The Labour councillor criticised central government for its progress in moving towards entirely renewable energy, identifying this as a “vacuum” to be filled by councils if they were to align the manner in which they buy energy.

Cllr Jon Burke (Lab, Woodberry Down), said: “London can drive this transition of the energy system. There’s huge opportunities out there to move markets.

“One of the things I’ll do is taking this idea on a bit of a roadshow around London.

“I’m not convinced this change is going to come in the short term from central government.

“Brexit continues to suck political life out of our country’s institutions, and therefore there’s a vacuum to be filled on these particular issues, and that’s why I see an important and unique role for local authorities to play.

“Without taking an overly interventionist approach, local authorities can use their existing spend to provide some certainty to markets.

“By sending that strong signal to the marketplace, the private sector can then make commercial decisions with greater certainty. We’ve added something to the value of the way that market functions then.”

Town Halls in London and the south, as well as schools, housing, blue light services and NHS trusts spend around half a billion pounds on energy and water for over 50,000 sites .

A recent report from the Intergovernmental Panel on Climate Change underlined the urgent necessity to limit global warming to 1.5°C, requiring carbon dioxide emissions to fall by about 45 per cent within the next twelve years.

← Would you like to hold an event on Dalston Roof Park?Borough’s rough sleeping rise an ‘outrage’, says housing needs chief →