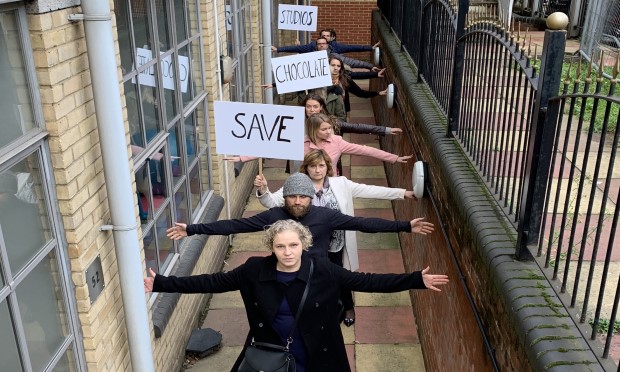 Controversial plans for the development of a hotel adjacent to a historic chocolate factory which council documents accept will cause “significant harm” to neighbours and businesses are up for a final vote next week.

The application for the development on Westland Place next to Chocolate Studios will progress to committee stage on 12 December, after a second round of consultations held following concerns raised about potential inaccuracies in the planning drawings.

Occupants of the heritage Victorian building have complained that they have spent thousands doing up their properties, only for their landlords, Westcombe, to “plunge them into darkness” with the addition of the six-storey Hampton by Hilton hotel metres away.

Dawn Tuckwell, director of Action PR, said: “We’re fighting it. It feels like such a David and Goliath situation. We’ve put so much time, energy and money into this, but it feels like the council are not on our side at all.

“If it was approved, we’d have no choice but to leave. We can’t be in this level of uncertainty as a business. It took us a long time to find that space and do it up, and if we have to go through doing that again, I need as much time to plan that as possible.

“I don’t know anyone that’s happy to be plunged into more darkness. We took a space expecting to have a certain level of light come through. This will remove any level of light that we have.

“The guys next door will have even less because they’re having the fire escape moved right up against their window. It’s not what you signed up for when you sign a lease.”

Concerns have also been raised on the lack of provision for a fire escape for residents during construction works, as well as the impact of further hotel provision in an area which residents claim is in more need of housing or workspace.

The report submitted for councillors to vote on by officers accepts that the development will cause “significant harm” to four flats at lower ground floor level in the former factory through loss of light, with four other flats with a loss of light considered “harmful”.

“The current occupiers clearly object to the loss of light, which is understandable, but there is no evidence to suggest that this would make the offices unusable for office purposes. In fact in this location there are some office occupiers that actually prefer to have lower levels of natural light.”

Resident and professor of architecture Alexandra Stara said: “The hotel will destroy light and amenity for scores of neighbours (residential and small offices) at a level unacceptable for even the most ruthless high-rise developments.

“There is no benefit to be had from this. Hackney does not need more hotels. Hotels are poor employment intensifiers, and what should be built, instead, is much-needed housing and offices.

“The borough does not need this hotel, it will take up land for other much-needed uses, it will severely degrade existing housing stock and offices, and it will potentially open up the Council to yet another judicial review if it goes ahead. Who will benefit from it, then?”