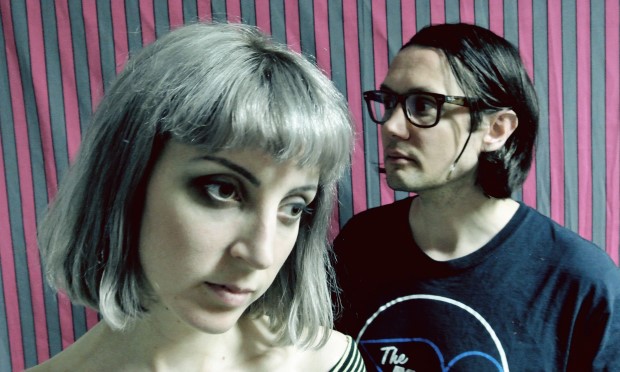 The majority is not always right.

The majority buys records by Coldplay and Imagine Dragons, but very often it’s the bands that go under the radar that best stand the test of time.

While Menace Beach’s fellow Leeds psych-punks Hookworms play venues such as Brixton Academy, it is a half-empty Oslo which greets the former.

Those who were there, however, would agree there are not many better ways to spend a Thursday night in Hackney.

The band walk out in front of a backdrop which drives the audience through a sprawling, psychedelic future landscape, painted in the band’s favourite colours – black and white.

Making the brave decision to open with three tracks from new record Black Rainbow Sound pays off instantly, with the synth/keys partnership of Liza Violet and Ryan Needham giving the audience a taste of how it might have sounded had Brian Eno and Martin Rev ever got together for a jam.

The increased electronic thud knocks the audience back into the pounding French synth wave of the late 1970s, while the guitar and rhythm section flanks the pair with relentless drive and energy.

A wail of guitar feedback hints at the more familiar material to come, as the high-pitched, glitching vocals of Needham wrap around the smooth “aaahs” from Violet on ‘Drop Outs’, from the band’s first album Ratworld.

The band follows up with more tracks from that record, as demented organ sounds underline ‘Tennis Court’, with its catchy “I’m a tennis court with nothing in it” chorus, and a guitar riff that walks the line between garage and grunge.

The track is easily one of the band’s most special, and would perfectly answer the question ‘What do Menace Beach sound like?’.

On the band’s latest album they are joined by Brix Smith-Start, formerly of The Fall and more recently of Brix and the Extricated, for two numbers.

While she’s not in the building tonight, her vocals, played over the PA system, make her sound like an overlord of the desolate future landscape created by Menace Beach with both sound and set.

The giant synth/keys set-ups in front of Violet and Needham feel like lecterns from which their sci-fi hymns are delivered.

Familiar material returns in the shape of Christmas single ‘Holidays are Heavy’, which sounds like Father Christmas at the helm of a UFO.

As the snowflakes stop falling the band leap into ‘Tastes Like Medicine’, a firm favourite in the room judging by the sudden surge of fans trying to fill any gaps near the stage.

The band plays only one track from second album Lemon Memory, the beautifully pessimistic ‘Maybe We’ll Drown’, featuring, of all instruments, an earth-shattering hammer.

An undeniable highlight comes when the guitarist takes the mic for new cut ‘Hypnotiser Keeps the Ball Rolling’ to smash through the eight-bit ceiling of drum machines with thunderous psychobilly guitar and slow, crooning vocals, like he’s possessed by The Cramps.

Violet and Needham’s synths sound like an alien exorcism as they squeal behind him.

The band finishes with Black Rainbow Sound closer ‘(Like) Rainbow Juice’, giving the audience a smooth comedown before throwing a final punch with its climactic cacophony of noise.

The evening at Oslo may end up as an ‘I was there’ moment for the few people who turned up – if Menace Beach eventually get the credit they deserve.

Their sound, bolstered by a distinctive dual keys approach, is unique – a word that is becoming increasingly rare in modern music.

← ‘No obvious link’ between Hackney’s drug markets and an increase in violence, report finds‘Grim reading’: Net loss of hundreds of social rent homes expected under Woodberry Down plans →