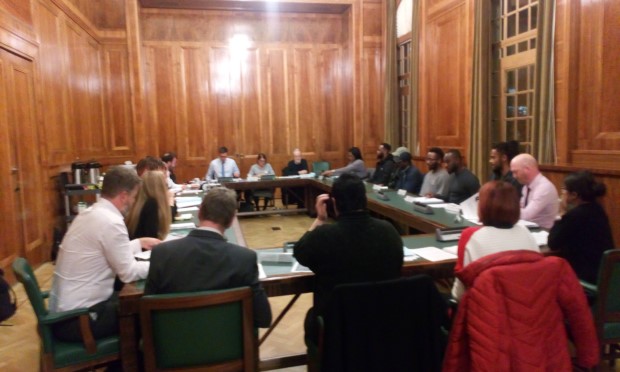 The Inspirational Leaders group is designed to enable young black men to carry out workshops in youth, school and community environments across Hackney.

The group is part of the YBM programme, a joint initiative between the Town Hall and Hackney Council for Voluntary Services (Hackney CVS), set up in 2015.

Deji Adeoshun, youth leadership manager with Hackney CVS, said: “Why it’s called ‘Inspirational Leaders’ is because of the negative messaging that is out there.

“It’s all about raising hope and aspiration for young black men. We’ve been hearing tonight about gangs and drugdealing – the reason why there’s an increase is because it’s easy to do.

“If I walk out of this room now, I can start a drug deal literally in five minutes. So when we’re thinking about strategies and policies, we need to be coming up with things that are equally as easy or accessible for young black men.

“Often there’s barriers or systems in place that make it unaccessible, and so they turn to the easiest thing.

“I’m not saying just give it to them, but let’s think creatively about recruitment, opportunities, how to set up your own business, and accessing services.”

The youth leaders also called for greater community participation in the initiative.

Artist Lamide Olusegun said: “I carry out workshops based on arts and craft with young people. I don’t explain the therapeutic side of it to them, I just let them have fun.

“There’s not enough young people, ten to twelve years older than them, with whom it’s easier for them to relate, to help guide and teach them.

“It’s easier for me to get their respect than older people, so we definitely need more younger people.”

“I’ve started a theatre company to put on shows and train as a performing artist, but young kids need places that are accredited and acclaimed as places to express themselves, and to be en route to where they want to get to from a very young age, and I feel like there’s not a lot of that.”

The Leaders were giving evidence to the commission as part of an upcoming report for 2018/19 by LiH on the recent escalation in serious violence and the council’s response to it.

The panellists underlined the importance of consistency in outreach and community work in order to signal its reliability to young people, as well as the importance of thinking creatively around more ‘nuanced avenues’ through which those in need could seek support.

Teacher and senior mentor Oluwatosin Adegoke said: “There have been times when I didn’t know where to turn, and the only two places I could think to turn would be police and education.

“Parents sometimes don’t know how to handle children who don’t seem quite right, so they don’t know what avenues to go down.

“Presumably you might have avenues dedicated to mental health services, to financial stress – nuanced avenues.”

The panel of mentors, artists and community activists were speaking at a 13 November meeting of the Living in Hackney (LiH) scrutiny commission, and are to be consulted on a range of issues as part of the upcoming report.

These will include concerns around the Metropolitan Police’s use of the Gang Matrix database, the impact of the use of the ‘gang’ label, the over-representation of young black men as victims of serious violence, and the community impact and role of police stop and search powers.

Overall levels of crime fell by 34.7 per cent between 2002/03 and 2014/15. However, there has been a recent rise in serious violence in the borough, with six murders seen in Hackney in 2017/18 compared to two in the previous year.

Sonia Khan, Hackney’s head of policy and partnerships, said: “That is something that we really soul-searched about as we were developing the programme. Does focusing on this problematise a particular group of people?

“But we quickly flipped that, as the group of young people that we are looking at are called Inspirational Leaders. They are raising the visibility of people who are successful and positive, as the majority of young black men in the borough are, but recognises that for those that are in difficulty, there are complex, systematic and structural reasons for that.

“So the focus is positive, but recognising that where there are inequalities, we can’t really gloss over them. We have to look at where they are and how to tackle them.”

← UK’s first ever postcode gardener gets to work in Homerton‘No obvious link’ between Hackney’s drug markets and an increase in violence, report finds →