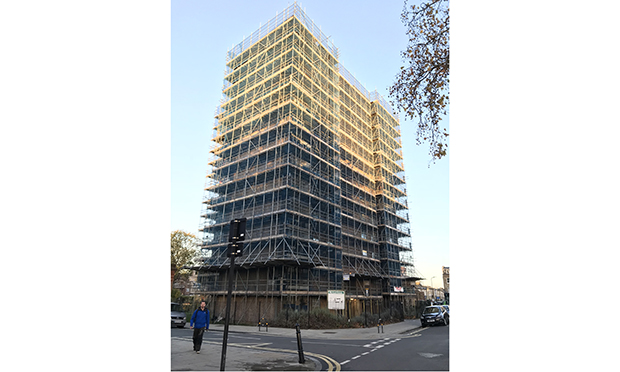 The council is proposing to spend £1.52m on work to make safe the brickwork of Morland and Fields estate towers, incurring potential charges of between £18,000-£25,000 each for the buildings’ leaseholders.

However, structural engineers Alan Baxter Associates has stated the proposals for the works as they stand seem excessive in a 26 October letter sent as part of a resident-commissioned report.

The letter reads: “It does not appear that sufficient investigation works have been carried out to justify all of the proposed works on the block.

“The proposal to take down and rebuild all the masonry returns on the corners of the building seems excessive, based on a single localised failure.”

The letter suggests a more targeted strategy for the remedial works, contrary to the current proposals to install stainless steel angles at every floor level and rebuild the brickwork on the buildings’ corners.

In November of last year, bricks fell 100ft from the face of 1-46 Morland Estate and landed close to the entrance of a primary school, due to corrosion of the ties pinning the decorative masonry to the building.

An investigation carried out after the bricks fell found that the ties “did not comply with relevant British Standards even at the time the building was constructed.”

Whilst tenants will have their share of the repairs covered by the council, Morland leaseholders face steep charges for the extensive works proposed by the council, with resident Lindelle Paul stating in October that this would represent “a blow that could put me back ten years plus on my mortgage.”

Residents have also been questioning the scale of the charges for repairs, pointing out that arms-length housing organisation Hackney Homes carried out works on the block between 2006-10 under the ‘Decent Homes’ programme.

Consultation documents show an estimated cost to the Town Hall of £585,095 for this earlier work, including £27,312.04 for “brickwork, including carefully [raking] out existing brickwork & [making] good all work disturbed and cut loose or defacing bricks and replace with new bricks to match existing”.

It is understood from council officers that this earlier work was not focused on the brickwork which collapsed in 2017.

The Morland Blanchard tenants & residents association (TRA), which called the report ‘explosive’, has formally objected through the consultation to the proposed works on the grounds that insufficient investigations have been made by the council to justify the proposed works.

The TRA also complains that it has not yet seen enough evidence to satisfy it that the correct procedures for the works have been followed under the terms of leaseholder agreements, and have demanded the appointment by the council of an independent expert and both pre- and post-reports of the ‘Decent Homes’ works carried out in 2006-10.

In a group letter delivered to Hackney Council, as well as to Hackney South & Shoreditch MP, Meg Hillier, eight Morland leaseholders and a TRA spokesperson said: “Tower leaseholders have been increasingly concerned by the absence of information, not just [the council’s] failure to justify the proposed costs, but at the absence of detail that we need to feel that the works will leave us feeling safe in our homes.

“All the leaseholders undersigned agree that the brickwork fall on 23 November last year was an unfortunate event, and needs remedy.

“It appears to have been caused by a combination of poor initial building work, which when coupled with the poor quality work on the roof, has resulted in damp ingress, the loosening of brickwork below the roof and the subsequent brickwork collapse. These could have killed someone.

“We are not trying to evade our responsibilities as leaseholders. We simply want to ensure that what is proposed is necessary based on firm evidence, and that everyone including the council gets value for money from any works proposed.

“In the event that the council rejects the points made here, we do collectively reserve our right to take the case to the First Tier Leasehold Tribunal for a full review of the council’s actions.”

Cllr Clayeon McKenzie, Cabinet Member for Housing Services, said: “We have not seen the report commissioned by residents and we have not received a request for access to scaffolding to allow inspections. However, we would welcome working with the residents’ engineer, including allowing them to carry out a full inspection from the scaffolding. We have already offered this to residents.

“We have surveyed the the building in accordance with industry standards by looking at several critical areas of the building and found the problem is consistent, which is why a provision has been made that all areas of the brick need to be worked on.

“Doing 100 per cent surveys is expensive, and could potentially destabilise the building further. The proposed Council works to the building were set out by an independent structural engineer, and validated by a RICS-accredited surveyor.

“The Section 20 is only an estimate and leaseholders will only be billed on the actual work done. If, during the works, we find some areas do not require alteration works, they will not be carried out, and this will be reflected in the final bill that leaseholders will be issued.

“However, due to the seriousness of this situation – which could have been fatal – we are taking a robust view on the need for works as this is critical to ensure the safety of those near the building and which is our clear legal obligation as a landlord.”

EDIT: This story was updated on 6 December with a response from Hackney Council.

← Community garden looking for trainees seeking to improve their mental healthThe Naturalist, Woodberry Down, food review: ‘The toilets are nice’ →