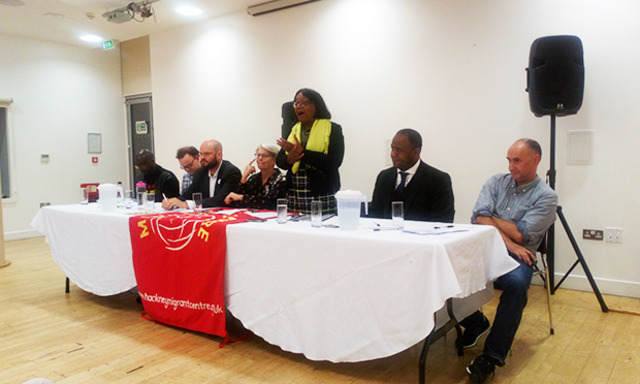 Hundreds of children in Hackney are in danger of routinely “going hungry at lunchtime” due to their parents’ immigration status.

At a meeting on ‘Citizenship in a Hostile Environment’, campaigners from North East London Migrant Action (NELMA) called for children from migrant families to be entitled to free school meals.

Both Diane Abbott MP and Mayor of Hackney Philip Glanville pledged to support to the campaign, and expressed their outrage after discovering children are going without food.

NELMA campaigner Benjamin Morgan said: “We’re calling on the government to change the law so that no-one is denied a decent lunch at school because of where their parents come from.

“We’ve talked a bit tonight about the hostile environment being an attack on rights and entitlements that we take for granted. Free school meals for disadvantaged children is a cornerstone of the welfare state in this country.

“Yet hundreds of children in Hackney alone are being denied free school meals on the basis of their parents’ immigration status.

“This either means that those children go hungry at lunchtime whilst their peers eat; or it means that their parents rack up hundreds or thousands of pounds worth of debt that they can’t afford to pay.

“These are children whose families the UK government has already forced into destitution and poverty by denying their parents access to benefits, and in some cases denying them the right to work.

“They are not children who have just turned up, but in some cases have been born in the UK. Some are British.

“If Windrush was a betrayal of a generation of 60 or 70-year-olds, then the denial of free school meals to these children is a betrayal of our future.

“We’re really happy that Mayor Glanville and Diane Abbott said that they would support our campaign.

“We’re writing to the Department for Education to ask them to change the rules on this, as it isn’t fair.”

In response to coverage in the Guardian of the policy in May of this year, the Department for Education released a statement claiming that “no child is refused access to free school meals because of their immigration status”.

However, according to Coram Children’s Legal Centre, in practice, children of parents with leave to remain in the UK but who are deemed to have no recourse to public funds (NRPF) are ineligible for the meals.

Speaking at the meeting, Mayor Glanville said: “Hackney has been built by migrants, whether it was the Windrush generation, the Huguenots before that, or EU migrants now.

“Go to Homerton Hospital – there are mixed nationality teams that serve the most vulnerable in our borough.

“I was disgusted to get the email from NELMA to find out that this was happening in Hackney, and I’m very keen to explore how we can meet this need locally.

“I want to absolutely campaign with NELMA about changing this nationally, but I want to do something about it here locally, and if that means writing to schools, or funding those school meals, then we’ve got to look at doing that.

“The council has very challenging environments around the legal frameworks and funding, but I think we always have an open door to discuss these issues with us and we want to make sure we do more on this agenda.”

Abbott, the MP for Hackney North and Stoke Newington, added: “The thing about school meals is particularly wicked, really, so I’m very happy to get involved with this campaign.

“I feel so privileged to be part of a process where we can hopefully change the law and develop a system that reflects the best of the British people.”

The meeting was set up by Woodberry Down and Stamford Hill West Labour in partnership with the Hackney Labour Ethnic Minority Forum to examine the “hostile environment” immigration policy.

Speakers made calls to petition the government for a fair compensation scheme for families impacted by the Windrush scandal, as well as warning of the dangers of hostile environment policy affecting cohorts of society beyond the Windrush generation.

Organiser Kofo David said: “It’s horrendous that a child comes back home starving from school. This is something that affects people from all demographics, so it’s a welcome development that the Mayor is supporting the campaign.

“Because Hackney is a borough that has a very diverse population, the conversation on immigration needs to change. We’re asking people to look at immigration from the context of the good that comes out of it, you can’t just look at the negatives, some of which are either stereotypes or blown out of proportion.”

NELMA & Hackney Migrant Centre will be holding a Picnic for Free School Meals at St Mary’s Church, Stoke Newington, N16 9ES, from 12–4pm on 29 September, with free food and drink, live music, and postcard-making and writing for children and parents to send to the Department for Education.