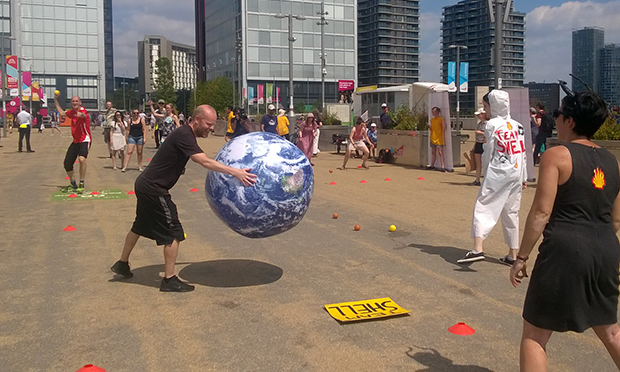 Hitting out: campaigners used an Earth ball for the game. Photograph: Twitter

Shell promoted the event, featuring performances from singers Ella Eyre and Lemar, as a “festival of bright energy ideas”.

It comes after the oil company’s announcement last year that it will increase its investment in clean energy to over $1 billion a year.

But Divest Hackney and a number of other climate activists hosted a “satirical” Save the Future dodgeball game on the final day of the festival to highlight Shell’s “hypocrisy”.

Campaigners say the money that Shell is pouring into green technology represents less than six per cent of its $25-30 billion total annual investment – and compared it to the $5-6 billion a year the company stumps up for deepwater drilling, and the $2-3 billion a year it puts towards harvesting shale oil and gas.

Shell told the Citizen it wants to help “solve the world’s energy challenges” and is open to “honest and constructive discussion”. 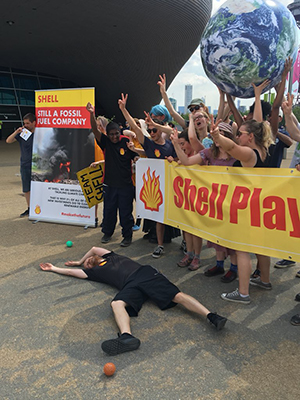 Camilla Zerr from Divest Hackney, which has spent years campaigning against Hackney Council’s fossil fuel investments, said: “Shell is playing games with our planet and we’ve had enough.

“Shell aren’t just working to burn a load of fossil fuels that we know have to stay in the ground – that, in itself, is bad enough – but they are searching for whole new sources of fossil fuels.

“And they’re doing that in some of the most dangerous and ecologically delicate places on Earth.”

Alethea Warrington from Fossil Free London, another group that took part in the protest, said: “This whole Make the Future campaign is sickeningly cynical and transparent.

“Shell’s investment in clean tech is tiny compared to their work extracting and burning fossil fuels, including deepwater drilling.

“When we heard about the event happening in the Olympic Park we were furious at Shell’s blatant hypocrisy, but we figured the best way to react against it was with a laugh, which is why we decided to take on Shell by playing dodgeball.”

A spokesperson for Shell said: “We want to work to help solve the world’s energy challenges, and that includes working with those who disagree with us.

“We will always be open to and indeed welcome honest and constructive discussion and debate.”

The Save the Future dodgeball game, which had its own Facebook page, went ahead despite a complaint from Shell that it infringed upon its Make the Future trademark.

The complaint came to light when campaigners posted an email, purportedly sent to them by a Facebook representative in June, which recommended they change the name of the event following a “trademark report from Shell”.