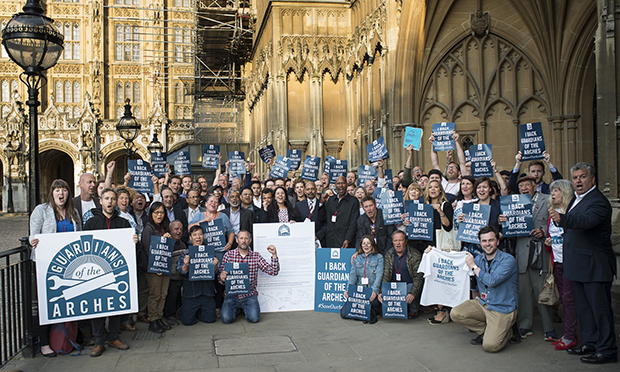 Against the sell-off: Guardians of the Arches protest at Parliament. Photograph: Sarah Ainslie

Businesses operating out of Hackney’s railway arches are at the spearhead of a national campaign to shed light on the potential consequences of Network Rail’s planned over-£1bn asset sell-off.

The Guardians of the Arches, made up of business owners operating out of railway arches across the country, held a meeting in Parliament on Tuesday 12 June to plead their case, as well as to highlight unmanageable rent increases that they link to the plans.

Local businessman Ben MacKinnon, who runs the E5 Bakehouse in the railway arch near London Fields station and chaired the meeting in Parliament, is one of many business owners dismayed at the threat posed to the future of Hackney’s local traders.

In an interview with the Hackney Citizen, Mr MacKinnon said: “The meeting was electrifying. We had a packed house with tenants from around London and the UK. We felt like we were talking to some influential people and it was great that they were picking up on it and listening.

“It seems like we’re way too late in some regards – it’s going to take a big push to flip public opinion and stop Network Rail’s asset sell-off, but anything can change, can’t it?

“I think it could really destroy Hackney, to be honest. I think it could mean we get another empty centre, and ultimately people are going to get a bit disappointed with where they live.” 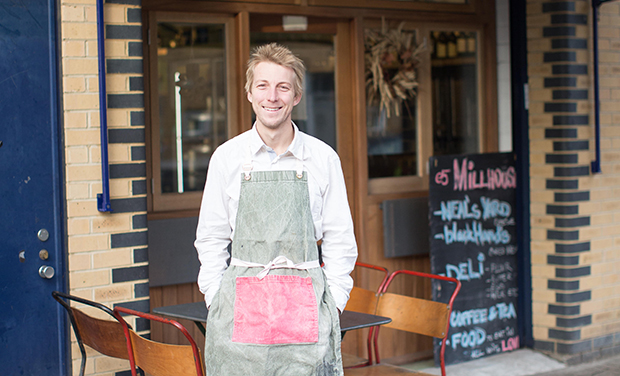 Network Rail announced at the end of 2017 the sale of its commercial property business, claiming this would allow it to “focus on its core business of improving the passenger experience and running a safe, reliable and growing railway and help fund its upgrade plan.”

However, with reports of arches’ rents spiking by 250-350 per cent, the Guardians of the Arches plan to petition the Department for Transport to take action to make up the infrastructure funding shortfall by other means.

Network Rail currently leases out 5,500 arches across the country, making it the UK’s largest landowner for small businesses, according to figures from the New Economics Foundation.

Mr MacKinnon said: “They reckon they might be able to sell off [the portfolio] for £1.2bn, and I think they get annually £70m rent from the arches – if you put a wee bit of inflation on that, you can probably pay off your £1.2bn in about ten years, and yet they’re handing over a 999-year lease.

“They’re sacrificing 989 years of being able to get an absolute fortune for nothing which could be funding so many fantastic public services or just helping rail infrastructure, but they’re hugely in debt and the government have told them they need to raise money where they can.

“One option is to not stop the sale, but to have the arches sold to the council. Even more ideally, they’d be community enterprises and the arches held in those trusts with loans from an ethical bank. Those loans could then be paid off with rent, after which the rent could go to support the community. If you ask me what I’d like, that’s what I’d love to see.

“If it’s sold to anybody on the current shortlist, they’ll just be going for the highest rental value.”

According to Sky News, amongst the potential bidders for the portfolio of sites are private equity firms Terra Firma and The Blackstone Group, as well as funds linked to Goldman Sachs.

Meg Hillier, MP for Hackney South and Shoreditch, was also present at the meeting in Parliament in support of the Guardians, and emphasised the level of uncertainty felt by local business over the plans.

Ms. Hillier said: “I’ve met so many wonderful, talented entrepreneurs in my 13 years representing the area. They know no-one owes them anything, they don’t want special treatment or handouts – they just want to do good, honest business, well, on a level playing field.

“Unfortunately, things are very uncertain for them at the moment, and very unnerving, because none of know what’s going to happen. The sale is one thing, but it’s what happens afterwards.”

East End Trades Guild founder Krissie Nicholson shares concerns about the potential transformation of the area that the loss of businesses operating from Network Rail’s arches would bring.

Ms Nicholson said: “These arches are public assets and they should therefore be put to use for the public good. A lot of the businesses within these arches are also huge assets to the community, providing local jobs. They support each other and they keep money circulating locally.

“In this time when inequality is getting worse and worse, it seems like a complete mystery why further erosion of community wealth that these businesses provide would be sanctioned and encouraged by government.

Mr MacKinnon said: “Probably 40 per cent of the street have left as a result of rent rises in the last few years. It’s changed our community quite a lot already.

“We deliver our bread by bicycle, which when it broke, the welding guy next door repaired the frame for us. The oven we used was fuelled with offcuts from the local carpenter’s. Our stainless steel tables and extraction system were installed by a company down the street – all those businesses are gone now.

“It’s really opened my eyes to politics in a way – seeing how terrible it is that this hugely valuable asset is being sold off without any noise being made about it. A thousand years of an asset earning money on behalf of the public, and it’s going to be sold off this summer for a few quid to plug a gap in a budget that is so in debt that it’s not even going to make a difference.

“As a landlord, but also as a public body, they have a responsibility to be thinking about those businesses and the communities that they’re in, and they’re not behaving in that way at all.”

A spokesperson for the Department for Transport said: “Network Rail’s sale of its commercial estate business will enable them to focus more effectively on the services people want to see from their railways by improving safety, reliability and capacity.”