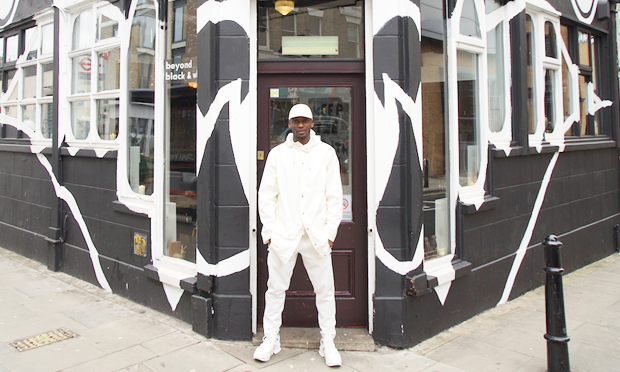 “What we’re looking at is retention of what exists”: Kollier din-Bangura outside 16 Dalston Lane earlier this year

As the DalstonArts150 campaign launches to halt the closure of local cultural spaces, the Citizen caught up with Kollier din-Bangura, one of the creatives being crowded out of the area.

A sculptor, din-Bangura has for the past eight years also run a number of arts establishments on Dalston Lane, from the Invisible Line Gallery, to multi-concept venues 91 Dalston Lane, 27a Dalston Lane and To The Jungle at 16 Dalston Lane.

Having come to London at the age of nine from Sierra Leone, he got a degree from Brunel and launched himself into the arts scene as a successful cultural entrepreneur. He is proud of the fact that he has never relied on handouts for his ventures: “I’ve never had funding, I’ve never had support. Everything I’ve done is through creating a good environment with artists”.

At the same time, he says, “society is not ready for a black guy to be in a gallery or to own a gallery”. He admits he is finding it more and more difficult to work in Dalston, as he struggles with obstacles in the planning system, his leases get lost to redevelopment plans, and his intimate venues get swallowed up by mega-building works.

But asked if gentrification is the problem, din-Bangura demurs: in his view the development of an area is a positive thing and people working in the arts should be able to adjust their strategies to suit the tastes of the communities they serve. “You can change a business, you can change the façade of a business to meet the needs of regeneration”.

The real problem, he thinks, is that the mix of communities is being lost. This mix is encapsulated in the name of his erstwhile gallery the Invisible Line – the cultural line that separates “good art from bad art, rich from poor – that invisible line that crosses between us, where we connect and where we don’t connect”.

This really came home to him when he ran two nearby cafes, Coffee at Ridley’s in Ridley Road Market that catered to the customers of the local traders, and To The Jungle, a hip arts cafe that served coffee largely to middle class creatives.

Staff temporarily redeployed from one shop to the other were particularly disoriented, yet din-Bangura himself lives successfully on both sides of the line and connects communities through his ventures. 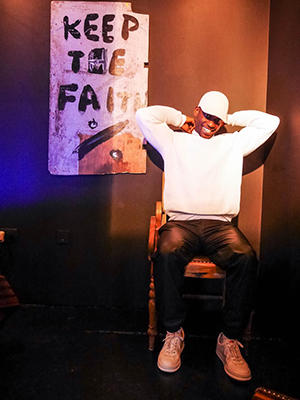 But as he sees it, entrepreneurs of his sort are threatened as black-owned businesses, churches and other cultural institutions get pushed out, and the cultural balance in Dalston is slipping. “What we’re looking at is retention of what exists”.

He claims that problems with affordable space are even worse for black businesspeople than for others. And he is aware that many of his peers are in more difficult predicaments than himself.

A good example is the plight of the traders in Ridley Road Market who have high rents, insecure leases and premises with limited services. Many of the stall-owners are parents with young children, and din-Bangura notes that they would benefit substantially from crèche facilities which they currently do not have.

The entrepreneur’s solution is to set up a foundation called Thee % that is designed to help black people to start and run successful enterprises. His vision is one of parity between people from different cultural backgrounds. To get there he feels “there has to be a new age of black people standing up in the community for the right reasons”.

And for him art plays a key role in the transformation he strives to bring about: “Art is very important in the way in which we present ourselves”.

Intelligent, articulate and immaculately dressed, Kollier din-Bangura certainly presents well, but without a concerted effort to preserve Dalston’s rich cultural fabric, it is unclear how much longer the area will benefit from people like him.