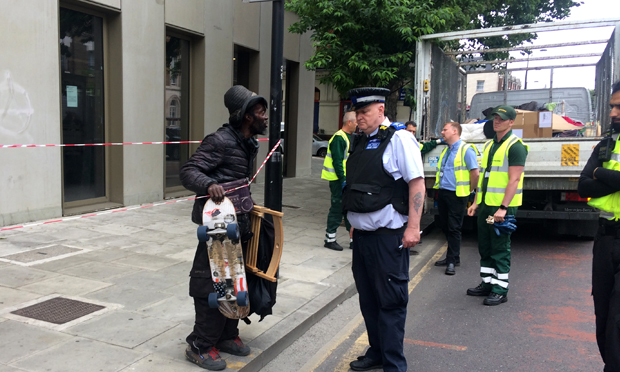 Two homeless men were evicted from their tents beneath the golden balconies of luxury flats on Mare Street today by a five-strong council team who called for police back-up.

Raja Hamid and Bertram Johnson have been living on the pavement outside the newly built and seemingly empty Abode apartment block near London Fields for the past six months.

The council served them both with separate eviction notices two weeks ago for “obstruction of the highway”.

With the 14-day deadline up, a Town Hall crew arrived this morning and threw the majority of Hamid’s possessions, including his sleeping bag, pillow and tent, onto the back of a truck, to be destroyed. 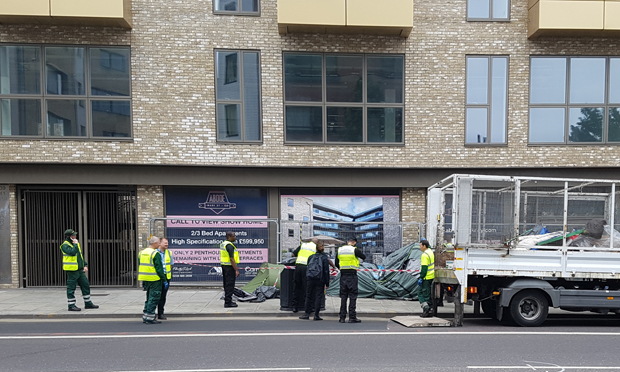 An onlooker named Natalie called the eviction “absolutely disgusting”, and said Hamid has been left with nothing.

Johnson, for reasons no-one at the scene could explain, was allowed to load his effects onto trolleys to take with him.

The council officer in charge told the Citizen the pair had been given notice, turned down offers of accommodation and are being provided with outreach support.

Hackney Council said it has received complaints from local residents and businesses about drug-taking, noise and fighting – the Citizen understands that some have said they are “too scared to go to the nearby newsagents at night”.

Needles were reportedly found among the belongings, but both Hamid and Johnson deny any allegations of drug-taking.

The council officer then tried to stop the Citizen talking to Johnson as he was packing up, accusing our reporters of “interfering with the operation”. 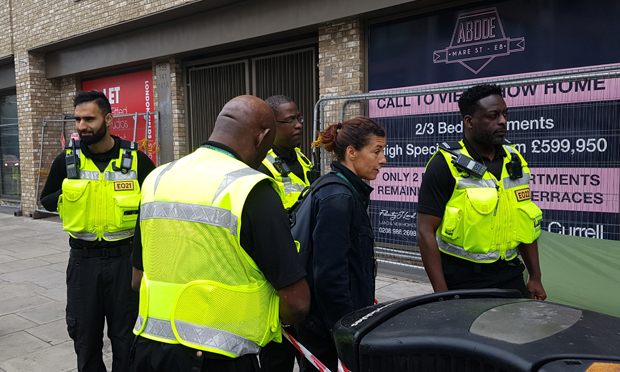 Hamid claimed he had earlier been dragged out of his tent, but the lead officer said he had not been touched.

Hamid added: “The council says there have been complaints from residents in this block of flats, but there are no residents! The building is empty.”

He also questioned the legality of his eviction after telling the Citizen a paperwork error meant his enforcement notice had the wrong name.

He then got into a heated argument with a local man who accused him of “always pissing on the street”.

The man, who did not wish to be named, told the Citizen: “This area is a hotspot of shit. These people are dealing drugs, urinating all over the place and shooting up. I’m happy to see the back of them.” 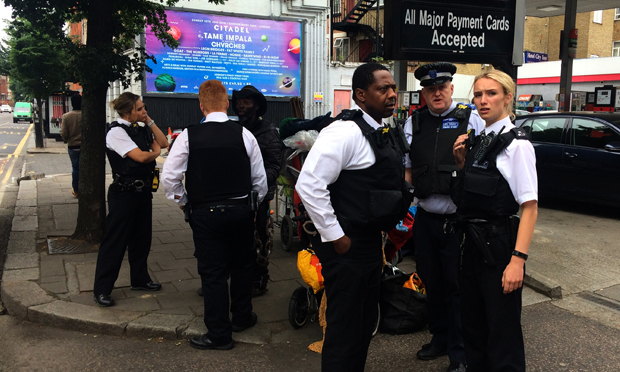 Police officers were called to the scene. Photograph: Hackney Citizen

Hamid, who says he would love to find a permanent home, responded by saying that “everyone pisses on the street, even the people coming out of nearby clubs”, and again denied any involvement in drugs.

He said: “If I was dealing drugs, I’d be living in one of those apartments, not out here in a tent.”

A nearby office worker also approached the Citizen to complain that Johnson had threatened him and blown weed in his face after he had asked him to stop smoking.

The man said he sympathised with Hamid and Johnson’s situation, but was “happy they are leaving” because their behaviour has become a “nightmare” for locals.

Six police officers later arrived on the scene after being called by a community support officer (CSO).

The CSO told the Citizen that Johnson, while packing away his possessions, had said to an enforcement officer who had a foreign accent: “If the council is evicting us, they should at least bring people who can speak English.”

The police talked to Johnson for about fifteen minutes, but did not take the matter further, eventually driving off and leaving him with his three overloaded trolleys. 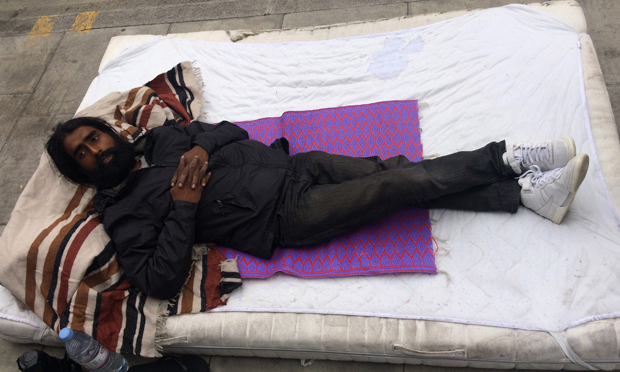 Raja Hamid on his mattress on Mare Street after the eviction. Photograph: Hackney Citizen

With the police and council gone, Hamid, who had been sitting on a nearby pallet with a carrier bag full of his remaining belongings, immediately moved back to the same spot outside Abode.

Laying back on a mattress he had just found, he told the Citizen he would be staying put for now.

When asked if he was worried about officers coming back, he said he would just move around the corner so the council has to serve him with a new notice.

Johnson is now based just over the road outside the Texaco petrol station, planning his next move.

The Town Hall’s community safety chief Cllr Caroline Selman said: “Hackney Council’s policy is to not take enforcement action in relation to rough sleeping itself, only as a last resort when there is anti-social behaviour from someone with housing or other support needs, and only when all outreach support has been refused.

“Anyone concerned about someone sleeping rough can contact Street Link via their app, at www.streetlink.org.uk or by calling 0300 500 0914.

“Anyone rough sleeping in Hackney can access accommodation and advice through the Greenhouse Centre on Tudor Road or from the No Second Night Out hub on Mare Street.”