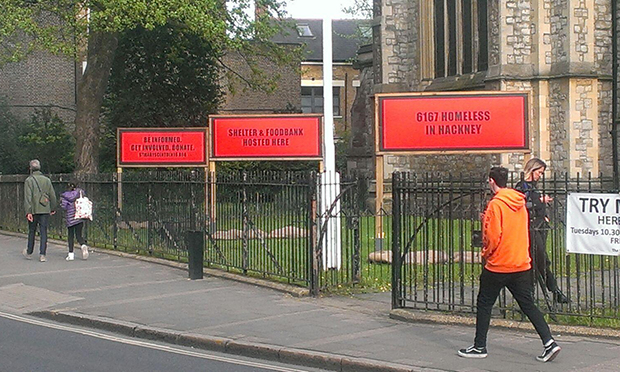 An enterprising church rector has borrowed an idea from a hit film to shine a spotlight on homelessness in Hackney.

The first reads ‘6167 homeless in Hackney’ – a figure that includes rough sleepers, sofa surfers and those living in temporary or emergency accommodation.

The number equates to one in 44 people in the borough.

Rev Baker said: “The billboard literally stops people in their tracks. It has become a talking point, a prompt for people to recall their own stories of poverty or homelessness.”

The second billboard reads ‘Shelter & food bank hosted here’, and the third provides a link to the church’s website, along with the message ‘Be informed. Get involved. Donate’. 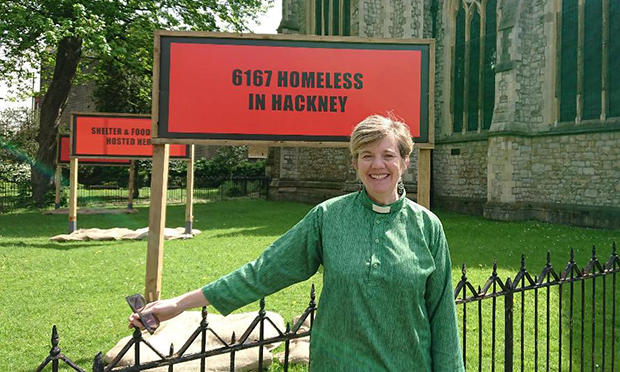 St Mary’s houses a night shelter during the winter months, as well as a weekly food bank and room for local charity Hackney Migrant Centre.

But Rev Baker says the venue “is not up to scratch”, and that funding is needed for a better kitchen and washroom facilities.

The church currently has just one shower for the 25 people using the winter shelter, and there is no private space for those using the Doctors of the World medical service.

St Mary’s also plans to launch a soup kitchen, a lunch club for the elderly and a money advice centre.

Fundraising efforts have already brought in over a million pounds, but the church needs a final £250,000 before it can lay the first brick, and Rev Baker is urging local businesses to donate £1,000 each.

She added: “Every day someone knocks on the rectory door asking for help because they can’t make ends meet. We live in an area of huge wealth but there’s real poverty here too.

“It’s a tragedy and a sad reflection on our society that in 2018 a rising number of people must resort to food banks.”

Three Billboards Outside Ebbing, Missouri was nominated for seven awards at the Oscars in March, with Frances McDormand picking up Best Actress and Sam Rockwell winning Best Supporting Actor.

The film centres on a grieving mother, played by McDormand, who uses three huge advertising hoardings to spark the local police into action over the unsolved murder of her daughter.

For more information on St Mary’s, or to donate to the church, please visit stmaryscentren16.org