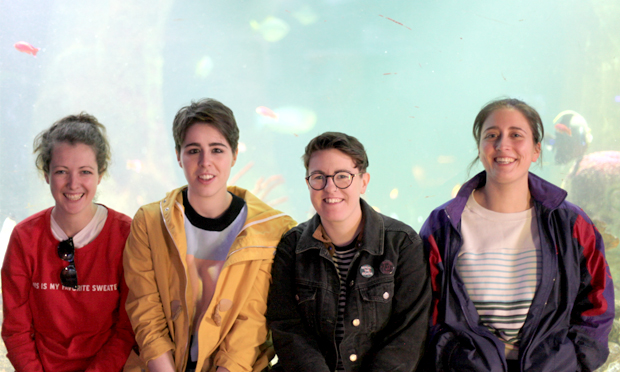 Pillow Queen, noun, definition one: “a girl (generally, though men can be too) who prefers to receive sexual pleasure without returning the favor because it’s all about her.” (Thanks, Urban Dictionary!) Definition two – a single member of this harmony-loving Dublin quartet – is rapidly worming its way into music lovers’ consciousness. In the run-up to their biggest ever show in their home country, the indie-rockers are queening it around England and Scotland in support of EP number two, State of the State.

Like on their first collection Calm Girls, the band use warm, 90s alt-rock guitars to power, for example, their musings on “[waking] up raging” (‘Ragin’’) and urgent requests for “brief hand holding on the sly” (‘Favourite’). State of the State’s penultimate track, ‘Cuckoo’, seemingly has more of an eye on the stadium than on a Bethnal Green basement; I wouldn’t be surprised if this is the last time you’ll catch Pillow Queens in a venue like this, so don’t sleep on the opportunity.

serpentwithfeet’s debut EP blisters announced the classically-trained singer (real name Josiah Wise) as an artist who is able to make sins sound holy and the holy sound sinful. Songs like ‘four ethers’ and the title track take the R’n’B Wise loves (he recently tweeted out an appeal for someone to send his new single to Brandy) and bolt it to collaborator Haxan Cloak’s squiggly strings and electronics and heart-stopping, operatic dynamic changes.

In doing so, blisters lyrically charts Wise’s complex navigation of queer identity and relationships, with every bit of the confidence and precision suggested by his occult-influenced outfits and melismatic voice. Debut full-length soil is coming in the summer, so serpentwithfeet now has a wealth of material to match his questing mind, which he’ll perform on what he’s calling the ‘Adult Storytime Tour’.

Cowtown have been ploughing their furrow for almost a decade and a half, but as with much of the country’s underreported DIY scene, despite headline gigs all over the country it can feel like they’re permanently just getting started. The Leeds [trio] have benefitted, at least creatively, from their affiliation with singer/guitarist Jonathan Nash’s other band, the newly chart-bothering Hookworms – newest Cow-lbum Paranormal Romance was recorded at singer MJ’s Suburban Home studio, and it ended up with artwork by their guitarist Johnny Wilkinson.

Cowtown are much more direct than Hookworms – they seem to have mastered the classic double-time punk drumbeat (see 2016 single ‘Tweak’) – but share an appreciation for synth sounds: in Cowtown’s case, laid on by keyboardist Hilary Knott. Her contributions, along with Nash’s herky-jerky vocal style, lead to sections of Cowtown songs sounding like Devo, Plus Tech Squeeze Box, and frequent tourmates Deerhoof – sometimes all at once. They’re also a dab hand at song titles, from ‘Emojicore’ to ‘Slice of Ketchup’.

Manhattanite Wiki is formerly of three-piece rap experimenters Ratking, and songs on his debut solo album No Mountains in Manhattan include ‘Stick Ball’ and ‘Chinatown Swing’. This verbiage gives an indication of Wiki’s (aka Patrick Morales) interest in the tropes of classic New York City – curiously amid rappers more at home with tougher parts of the five boroughs, he’s a proud Upper West Sider (a historically Jewish neighbourhood) who defines his interests in ‘Islander’ as “the 1 train, bagel with lox [and] crushing the mic”.

The half-Irish, half–Puerto Rican 23-year-old’s beats are as diverse as his city and his choice of cultural touchstones, with expert production from the likes of Sporting Life and Odd Future’s Earl Sweatshirt (whose ‘AM // Radio’ Wiki guested on). Further vintage East Coast flavour is provided by Ghostface Killah’s guest verse on summery banger ‘Made For This’, a coup Wiki described to TimeOut as “pretty much the dopest shit ever” – his on-edge, political verse adds grit to Wiki’s wise-guy flow.

Now this is a story, all about how London Fields is gonna get turned upside-down. So I’d like to take a minute (just sit right there) to tell you about a DJ from a town called Bel Air. Actually, Jazzy Jeff, like his friend and Fresh Prince collaborator Will Smith, is from Philadelphia, and those of you raised on Uncle Phil and co. will recognise Jazz from his frequent flying trips out of the Banks family’s door.

Jazzy Jeff’s live set encompasses tough and raw cuts from 90s rap to the kinds of neo-soul and jazz-hop that he himself has explored on solo albums like The Magnificent, and last year’s Chasing Goosebumps – which was made in only a week. (Jazz has 15 post-Fresh Prince albums to his name overall.) All in all it’ll be a great way to spend a Friday night, even if it’s not ‘Summertime’ just yet.

← Concerns over future of Hackney’s markets amid ‘challenging’ landscapeElections 2018: A guide for voters ahead of May’s poll →