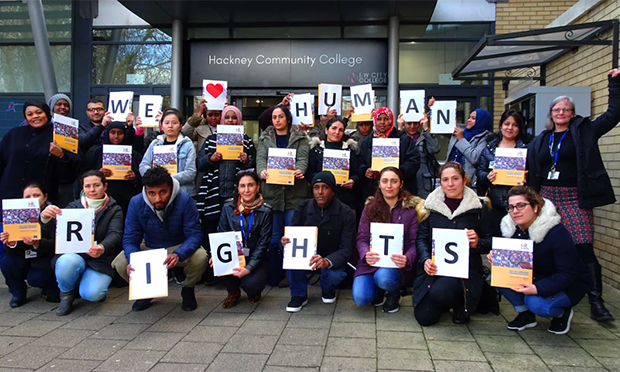 A “ground-breaking” two-year scheme to combat gender-based violence is being piloted at Hackney Community College (HCC).

The project hopes to tackle issues such as female genital mutilation (FGM), honour crimes and forced marriage by teaching students about human rights alongside their language courses.

“It’s so important that everyone living here understands their human rights and how to support each other.

“By learning English at the same time as learning human rights we believe that that people will be empowered to have brighter, safer futures.”

The charity says 80 students have already benefitted from the project, backed by the European Commission’s Daphne programme which provides resources and support to organisations fighting for the protection of women and children.

HCC teacher Siobhan Markwell said the scheme has led to “many students sharing their stories”, adding: “We’ve all learnt a lot about the injustices that drive people from their homes and our respect for people who endure long and dangerous journeys to make new lives here in the UK grew enormously.”

IKWRO was founded in 2002 to represent women and girls from Middle Eastern, North African and Afghan communities at risk of gender-based violence.

It opened its first specialist refuge in 2015, and last year provided support to over 3,000 women and girls.