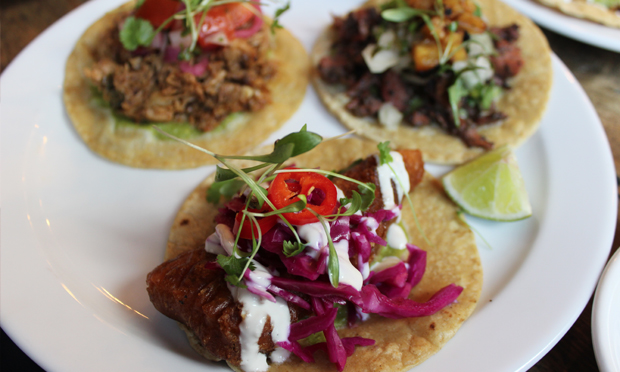 Taco trio: the Tofish option is front-and-centre in this picture and in our reviewer’s affections. Photograph: Jade King

“You realise the review’s at 3, not at 2, right?” My father is over an hour early to arrive at Homerton’s 100 per cent vegan The Spread Eagle pub and kitchen, and I’m still getting dressed.

“Yeah, so? It’s a pub innit?” He has a point. Perhaps my little experiment, bringing my meat-loving parents to such a plant-based hangout, isn’t such a crazy idea after all. Although my mum’s Facebook check-in (“Vegan for Sunday lunch – this could be interesting!!”) suggests there’s still a little trepidation.

The Spread Eagle, in the former home of The Jackdaw And Star on Homerton High Street, is the brainchild of Club Mexicana head Meriel Armitage. Partnering with cofounder Luke McLaughlin and publican Sherri-lee Estabrook, they have brought their already blazingly popular vegan Mexican menu with them. (Other pop-ups are due in the kitchen in due course.)

“I could have drawn a picture of this place before we got here,” asserts my dad when we eventually arrive. Further probing reveals that, thanks to his viewing of daytime antique shows, he’s noticed that a lot of upcycled, shabby-chic pieces (found throughout The Spread Eagle’s bright interior) end up travelling East London-wards.

Nonetheless, both my mum and dad praise the atmosphere – the place is busy but not overcrowded, and the staff are faultlessly friendly and helpful. Again, so far so good. 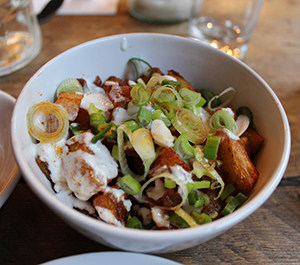 We look over the pared-down Mexicana menu, and my girlfriend (the only vegan at the table) walks my parents through the various meat substitutes featured – oyster mushrooms become ‘scallops’, jackfruit is discussed, and an explanation of (Hackney favourite) seitan is proffered. They’re relieved to hear that the potatoes are made of potato.

And what potatoes! Triple-fried and heaped with chipotle oil and sour ‘cream’, the only let-down is that the bowl doesn’t somehow automatically refill, through the same “vegan voodoo magic” to which our server credits their vegan cheese.

Said cheese (or ‘cheeze’ as The Spread Eagle calls it) comes deep-fried with Valentina hot sauce on the ‘beer-pairing’ section of snacky sides. Although with my dad around, any beer doesn’t last long enough to be paired with anything.

We also snack on the aforementioned pan-seared ‘scallops’ – the mushroomy texture is firm and intriguing, and the minty salsa verde elevates them to a must-try. 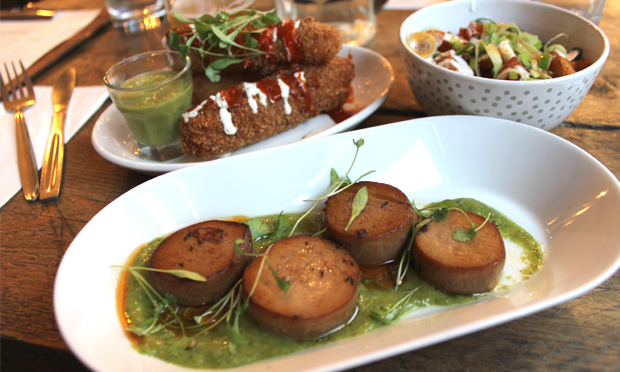 Tacos (with handmade corn tortillas) are available at 2 for £7 or 3 for £10 – as I explained to my mother, who was rightly confused by the trendy dropping of the pound-sign from the menu (“I thought it was rating how spicy it is.”) Between us, we sample all four varieties.

I won’t rehash too much of my previous review of the Baja Tofish taco (I visited Club Mexicana during its original stint at Dalston bar Pamela), save to say that its nori-infused fishiness and rich tartare remains absolutely stunning. 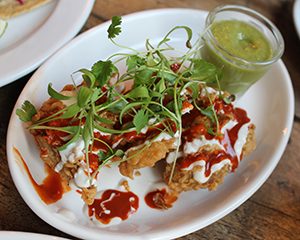 Special mention must also be made of the Al Pastor taco, with its masterful deployment of the transcendental flavour combination of onion, pineapple and coriander, alongside the marinated ‘pork’. All four are worth the visit alone though, to be quite honest.

I push my parents for more of the incisive critiques of veganism I was hoping for, but both of them are distracted by chowing down on ‘chick’n wings’, and are just saying “Mmmm.”

My dad finally speaks. “The flavours and the textures, you just couldn’t tell it wasn’t meat.” I reply: “Really? Even without the bone inside?” “Mmmm,” says my dad. “Mmmm,” says my mum. A ringing, much-deserved endorsement.