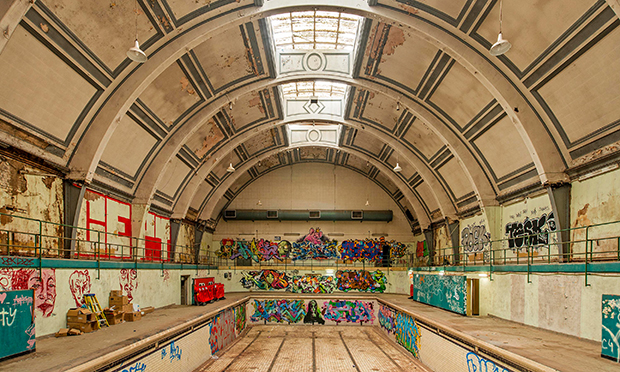 Haggerston Baths is set for a revamp as the council approves plans to turn the Garde II-listed site on Whiston Road into cafés, shops and a health centre.

But the Mayor has expressed sadness that the plans do not include reviving the building’s popular swimming pool.

Haggerston Baths has been closed since 2000, and in the last three years cost the council on average £108,000 a year.

Plans for the site by developers Castleforge Partners were agreed at a 27 November cabinet meeting, where Mayor Philip Glanville said the deal would safeguard the building’s future.

However, campaign group Save Haggerston Pool said it was “very disappointed” about the lack of swimming facilities in the plans.

Speaking at the meeting, Mayor Glanville said: “I would like to pay tribute to the work of the officers for this report and to find a solution to Haggerston Baths that safeguards this fantastic building.

“There’s no longer sadly going to be a municipal swimming pool as it was in a previous life, but it safeguards the heritage value of this building and ultimately leads to it being opened up for community access, and hopefully leads to community uses and new employment space in that part of the borough.”

New uses for the site could include “clinics, museums, health centre, creches, day care centres, halls, art galleries”, plus “183 square metres of retail” and “46 square meters of café/restaurant in the former pool hall building”, according to the report.

Glanville said the council is investing “in the rest of our leisure estate”, which includes swimming pools at the London Fields Lido – currently closed after months of delays – and Britannia Leisure Centre, soon to be shut for redevelopment.

Mike Coysh, chair of Save Haggerston Pool, told the Citizen: “We’re very very disappointed that there’s no swimming pool included in the plans.

“We have taken it as a message that the campaign has failed really on that score.”

At the meeting, Mayor Glanville paid tribute Save Haggerston Pool’s campaign during the years of wrantling over the Baths’ future.

He said: “This has been a long drawn out process that looked at every way we could engineer a leisure use or swimming pool at Haggerston Baths, and I think the time it’s taken to get to the report this evening is testament to the work that went on through the bidding process to see if there was a way of getting water back into that building in an accessible way.”

He said this included public meetings and consultation with the local community, adding: “I pay tribute to the work of the Save Haggerston Pool campaign and those people that attended all those meetings.”

Coysh responded: “We do feel that – especially more recently – we developed a working relationship with them [the council] and some of the people were working very hard to get a solution that included a swimming pool.”

But noting Castleforge’s 250-year lease on the site, Coysh added: “Two-hundred and fifty years is a long time to rule out that [Haggerston Baths] could become a public swimming facility.

“We do like to think that there could be a swimming pool there one day.”