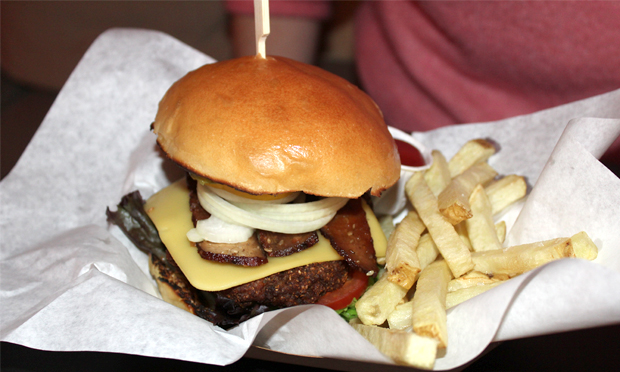 East London presents vegans with a lot to get their teeth into.

With a growing population hungry for cruelty-free junk food, Hackney is a fertile testing ground: the Fat Gay Vegan/Eat Work Art collaboration Hackney Downs Vegan Market is a showcase for a rich variety of vendors perfecting signature plant-based dishes, and of course the popular Temple of Seitan started as a street food stall in Brick Lane before finding its permanent home on Morning Lane.

What better place to try a new contender on the vegan junk food scene, the Doppleganger: a ‘vegan burger that could be mistaken for meat’.

Designer by day, fry cook by night, Alfy Fowler perfected a soya patty in his boss’s kitchen in Cambridge. The result is the Doppleganger burger, currently gracing the vegan scene in Cambridge, but Fowler wants to have a presence in East London and is aiming to accelerate things in time for Veganuary. Their November pop-up took over the cosy basement restaurant of The Grocery, in Shoreditch.

It was with hungry anticipation that I watched the first Doppleganger burgers of the night approach our table. Presented in a basket with no cutlery (as it should be), the only option is to shove as much of it in your mouth in one go and make a huge mess.

Mine was the Classic: a perfectly fluffy sourdough bun with slices of Violife (my personal favourite of the often-disappointing vegan cheeses), pickles, salad and deliciously salty strips of ‘bacon’, of course accompanied by the Doppleganger patty in an umami marinade. 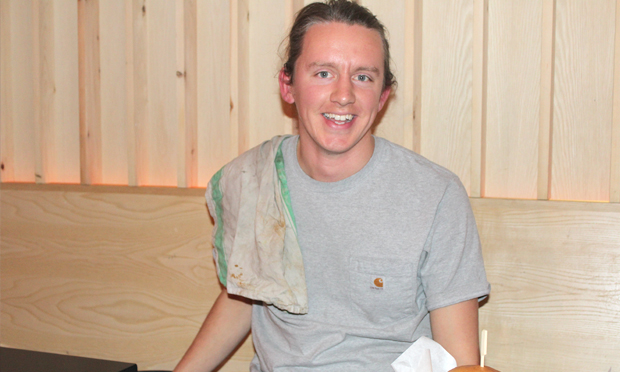 Alfy Fowler developed his soya patty in Cambridge, with the help of workmates and loved ones. Photograph: Jade King

The burger is a carefully planned masterpiece: the bread, patty and accompaniments sit in harmonic balance.

My only criticism was that I wanted the whole burger more melty and hot – Violife can melt if you give it enough time – but we were first ones to dine that evening so maybe the kitchen was just getting fired up.

My dining partner had the Chow me–in, an Asian-inspired burger with miso flavours, crunchy vegetables, lemongrass and coriander sauce and a sweet hoisin ‘duck’: the flavours worked brilliantly with the slightly sour patty.

The fries were perfectly fine, but the intense flavour of the burger overshadowed any thoughts I might have had about them.

A burger at Doppleganger isn’t the cheapest you’ll find in Hackney, but I‘d rank it very highly among the fake meat I’ve tried in the capital (even just beating a fantastic seitan burger I had a few months ago at Pacific Social Club – sweet, tender, caramelised-to-the-point-of-almost-burnt). 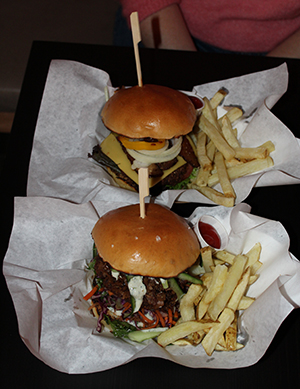 The Chow-me-in (bottom) is packed with Asian flavours, and even ‘duck’. Photograph: Jade King

Thinking about the Doppleganger now makes me want to sink my teeth into one. The wholesome, peppery patty is filling but much lighter than its animal-flesh nemesis. I could be fooled into believing I’d had my first bite of beefburger in 15 years due to the texture and umami juiciness, but then again, even Linda McCartney sausages taste like meat to me (which, I am told, is definitely a misconception).

Surely it is only a matter of time before more scarily realistic, genetically engineered patties such as the Impossible Burger travel over the Atlantic to the UK. Meanwhile burgers such as Doppleganger offer a tasty step towards a vegan burger utopia.

Though possibly not going to fool any avid meat eater, it is made with love and an impressive demonstration of grass-roots experimentation. I hope that is enough to tempt and satisfy regular meat-eaters, on top of achieving the rabid praise it will inevitably win from the vegan community.

It is worth keeping an eye out for a Doppleganger in the neighbourhood.

Doppleganger plan a return to East London in the near future – to keep up with what they’re doing, visit their website