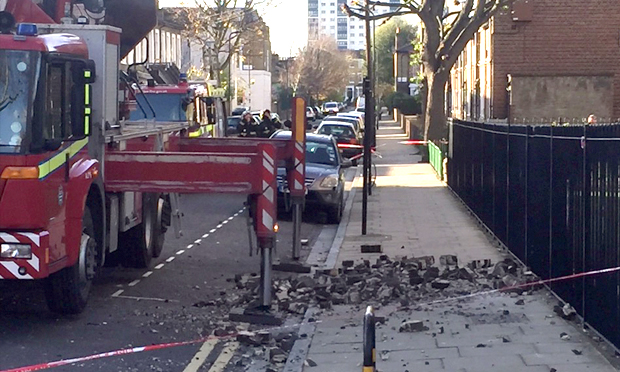 It appears Hackney residents have had a lucky escape after part of a tower block in London Fields collapsed this afternoon – with broken masonry raining down from “100 feet” onto a nearby road. 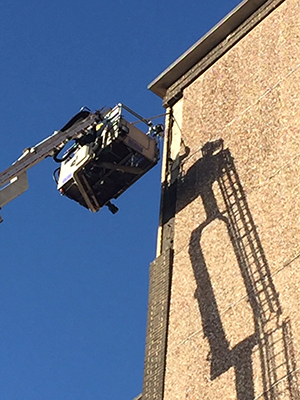 So far, there are no reports of injuries, but dramatic pictures of the aftermath show what might have been.

Fire fighters rushed to firm up the tower block on Morland Estate, using a crane to get to the damaged area.

Below, debris was left scattered across the road, along with a pile of bricks that appear to have narrowly missed a parked car.

It is not yet clear what caused the damage, but heavy winds have been pummelling buildings across the capital over the past couple of days.

Julian Blake, chair of the local residents’ association, sent in pictures and said the masonry had “crashed 100 feet to to the floor”. 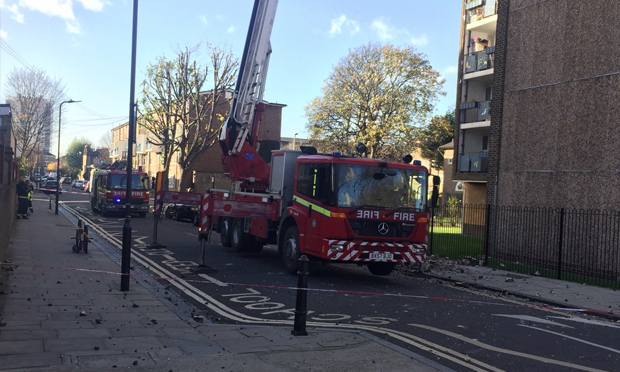 Lucky escape: bricks cover the road but no reports of injuries as yet. Photograph: Julian Blake

Blake said housing officers had told him the “building and surrounding area are safe”, but added that “it would be good to know that for sure”.

A spokesperson for Hackney Council has confirmed that “no-one was injured” after “decorative brick work came away from the building”, adding: “The emergency services attended the scene, loose bricks were removed from the building and other brick work was checked.

“The council’s building control surveyor confirmed that the structure of the building has not been affected. The investigation into the condition of the decorative brickwork and the cause of the issue continues today.”

Update: this article was amended at 13:20 on Friday 24 November 2017 to include a comment from Hackney Council.