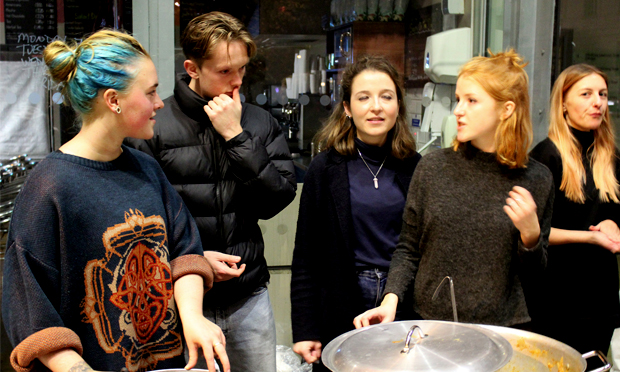 Refugee all stars: volunteers range from all walks of Hackney life

It’s a cold night on Mare Street, one of the first of the year, almost Christmassy if it wasn’t for the swirling rain. And indeed, the season of goodwill is in full effect on the plaza outside Hackney Central Library, where Refugee Community Kitchen (RCK) volunteers are hurriedly setting up their pitch for an 8pm start, as they do every Thursday.

As the grand, steaming pots of food are opened and ‘Pressure Drop’ by Toots and the Maytals starts to blare from the speaker, Bob Trafford (freelance journalist and coordinator of the Hackney RCK operation, along with school teacher Olivia Hanson) admires the bread haul donated by Dalston’s Dusty Knuckle bakery:

“Look at this bread! This is the stuff that the hipsters pay three, four quid for. We’ve got the homeless of Hackney sick of sourdough!”

RCK started life with the rush of conscientious Brits to the Calais Jungle site, once the migrant crisis really started to bite, in December of 2015. Expanding to other camps in Northern France, the organisation has cooked over 1.5 million meals, over half a million tonnes of food, for those in need – often having to avoid police vans to get grub to the needy.

Some of the ordinary Londoners who returned from this extreme situation saw the opportunity to maintain this network of volunteers, in service of the capital’s increasing numbers of homeless people. Thus, under the tutelage of Janie Mac (who Trafford calls “the boss, mentor and general all-round inspiration”), RCK’s UK operation was born, first in Camden, and now in the shadow of Hackney Town Hall.

Local businesses have been supportive – aside from the bread, the Hackney Empire Bar store lots of their equipment when needed, and Allpress Espresso on Dalston Lane provide an occasional lend of a van. Trafford hopes that all of the businesses along that end of Mare Street to follow suit and give what they can, especially when it comes to any spare food past sell-by. “It’s really heartwarming to feed people who the system has left behind with food that the system has left behind.” 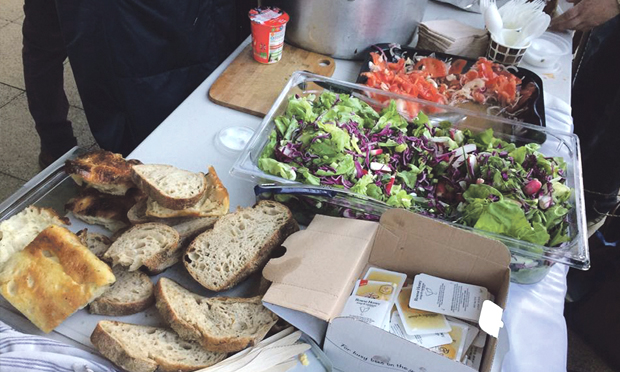 There are issues to consider, as Hanson explains: “Sometimes someone will come and be lovely, next time they might be angry, or maybe a bit drunk.” People who normally hang out in Dalston are sometimes wary of their Hackney Central counterparts; RCK are keen to get a new service going soon, perhaps in Gillett Square.

Expansion plans don’t stop there, they want as many different services as possible on offer, all for free – barbers and doctors are high on the agenda. Moreover, as an orderly queue is formed and food is served out, two Street Vets appear and begin checking over the assembled – loud – canine population.

StreetVet provide veterinary services free to the homeless. Co-founder Sam Joseph gives me the rundown: fleas; worming; vaccination; stress collars for the coming firework season. One regular dog has a lump on his leg, and they will remove it surgically (albeit not on the street, of course.)

I also spoke to Ark, a volunteer who has “loved” cooking dinner on three occasions for RCK, aided by other volunteers-cum-friends popping round to his flat and helping out. “It’s not extraordinary what we’re doing, it’s very simple and basic, and it’s just people like you and me.”

As the nights volunteers huddle around the vat, I speak to an older gent, enjoying his dinner and watching the service. “It’s like The Last Supper, you know the da Vinci painting? Them all huddled round.” This food is crucial, but isn’t the only thing providing warmth here tonight.