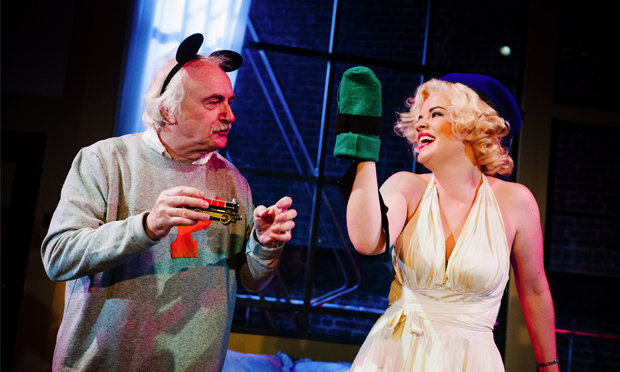 The Arcola Theatre’s revival of Insignificance, the 1982 Terry Johnson play set in Albert Einstein’s hotel room, kicks off with The Senator bursting through the door with a bottle of Jack to share with the genius German.

He’s a clear analogue for Joseph McCarthy of McCarthyism fame, and immediately begins to cajole The Professor (no celebrities are named in the script, although Megan Rarity’s costume work in particular makes very clear who’s who from the get go) into testifying at his committee.

So far, so topical – although Tom Mannion’s performance as the Senator is more Sean Spicer than Donald Trump in its pathetic mixture of sweaty glad-handing and bully-pulpit browbeating, the link between U.S. celebrity and U.S. politics is even closer now than in the days of movie-star President Reagan. 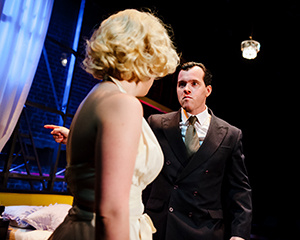 However, there’s more to Insignificance than a simple rumination on fame and its impact, and it’s these other themes – marital alienation, the intellectual stymying of women, and yes, the insignificance of celebrity in the face of personal anguish – that this successful production draws out.

The next party storming in and further disrupting The Professor’s evening is The Actress (obviously Marilyn Monroe, in full Seven Year Itch garb), fresh from being ogled all day over an air-vent and keen to prove her intellect to someone who seems to be a hero of hers. (The genesis of Johnson’s script was his discovery that Monroe had a signed letter from Einstein in her personal effects.)

Fully deserving of her recent nomination for Best Female by stage awards The Offies, Alice Bailey Johnson (performing her own father’s script, although she admitted to What’sOnStage that she hadn’t read it till this opportunity cropped up) initially plays Marilyn with speedily unwinding energy.

This reaches its apex during the famous scene where The Actress explains Einstein’s own theory of relativity back to him using toy trains and torches from the five-and-dime – adding in notes of cold anger when she feels like she’s being patronised and scalding sexuality when she reaches the theory’s climax.

But when her husband Joe DiMaggio (or The Ballplayer, portrayed rambunctiously by Oliver Hembrough) arrives, this vivacity disappears. While the furious-yet-ineffectual DiMaggio gets many of the big laughs (his simple pride in appearing on bubblegum cards is great fun to watch) the play moves further into Miller-esque longing and tragedy as it enters its second, final act. 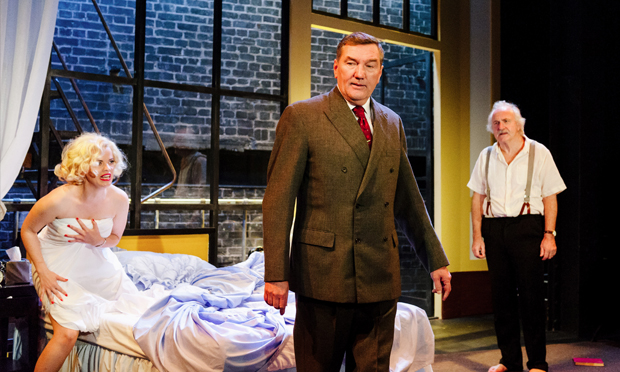 In the face of all this, Simon Rouse’s Einstein is a perfectly pitched foil for the mania of the other characters – sanguine but not aloof, kindly but cutting. His own internal strife is not really touched upon until the sudden finale, which I will not reveal here but is a final triumph of David Mercatali’s direction and his team’s use of the Arcola’s intimate space.

All four main actors are excellent at bouncing off each other and maintaining their distinctive characters through Insignificance’s many threads, spelling out the misfiring interpersonal dynamics between them with real emotion. Why not skip the dirty burger or pizza joints and enjoy a thoughtful twist on the all-American night out?

Until 18 November. Tickets available at arcolatheatre.com/event/insignificance/