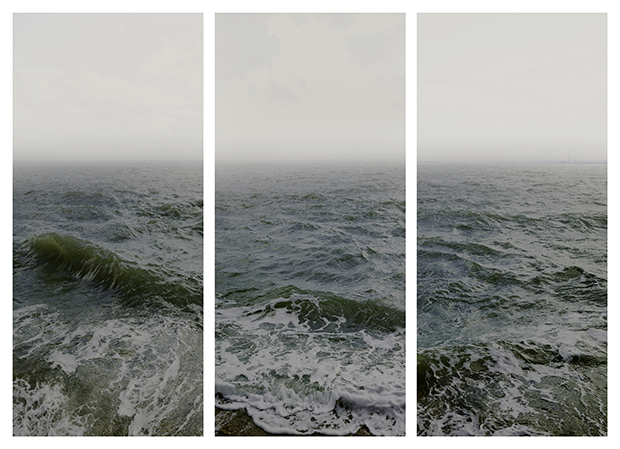 Water I part 1, 2 & 3, (Shoeburyness towards The Isle of Grain), England, 2015, by Nadav Kander, Courtesy of Flowers Gallery London and New York

This is the debut solo exhibition from Labet, alias of London-born artist Lola Betiku. Her body of work is a continuous exploration of her West African heritage, and in this collection, her focus drifts to the music genre, highlife. Like the Ghanaian rhythmic guitar-driven style, Labet’s paintings are at once both angular and warm. Considering the huge array of colours used (black faces are rendered with splashes of blue, yellow and orange, laid on thick in oil) the subjects’ power and character comes through regardless. Labet honours ‘soldiers’ like E.T. Mensah, Victor Olaiya and Afrobeat legend Fela Kuti, and calls her subjects “figurative [expressions] of my love and appreciation for African highlife music; where it starts, where it goes and where it can take us all.” From 9 November until 14 November 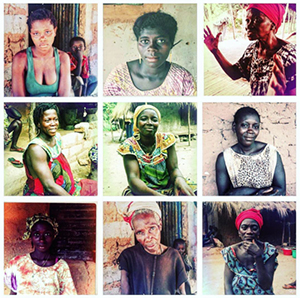 A selection of shots from 40 Women. Photograph: Victoria Cameron-Mowat / Instagram

Bubaque Island, the island off the coast of Guinea-Bissau in West Africa, is one of the world’s few matriarchies. The island consists of villages headed up by Matronas – female chiefs – and populated with self-sufficient communities living off of the land and sea. Given the socio-economic constraints on the region, life on Bubaque is no easy-ride – electricity and water are in short supply, and the Matronas double up as midwives. Victoria Cameron-Mowat’s sensitive pictures are no portraits of woe, though. The visible strength (physical and emotional) of her subjects is augmented with a short bio and matter-of-fact excerpts from interviews in their local language. From 2 November – see Arch 5 on Instagram for opening details

The West London branch of Victoria Miro welcomes Canadian artist Stan Douglas this month, for an exhibition that features some unique billboard-sized photographic works of Hackney during the 2011 riots. I say ‘photographic works’ instead of photos in a nod to Douglas’ role as reconstructionist: earlier this year he hired a helicopter and flew over Mare Street and the Pembury Estate, eventually combining the footage he shot with news imagery from the riots, creating hi-res collages that give viewers a figurative and literal new perspective. Looking down at a place so familiar and seeing the configurations of riot police, small fires and scattered locals, it’s hard not to be transported right back to that chaotic week, and to think about the many forces at work that August. Until 20 December 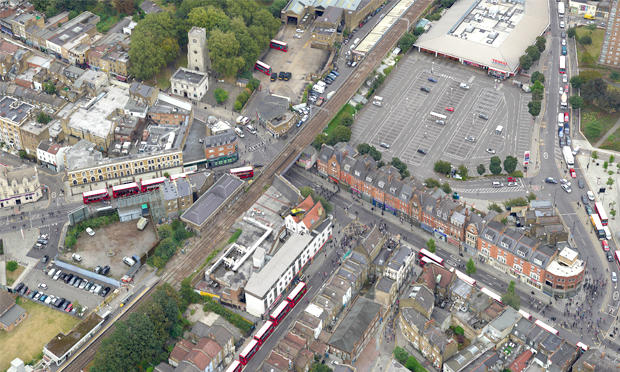 British photographer Nadav Kander’s defining photo-project to date saw him travel the Yangtze River – eventually presenting his studies in human change, against the backdrop of the gargantuan waterway, in the Prix Pictet-winning collection The Long River. His new series Dark Line presents images of the Thames Estuary, which maintain the scale of the Yangtze pictures but are more abstract and much less human, taken at outposts like Shoeburyness and the Hoo Peninsula at Medway. They speak more of a swallowing sense of isolation and desolation, aided by the deep blacks and slate greys of this inhospitable meeting point of land and sea. Dark Line will also include a specially created video installation by the artist. From 17 November until 13 January 2018

Like Kander’s pictures of the Estuary, Alpa Depani’s takes black and white photographs of an unshowy corner of the South East. However, where Kander’s Thames rages turbulently, Depani depicts Homerton’s architecture with a stillness and order; the buildings’ noble straight lines acting as a frame for many textures of stone, metal and glass. Keeping it local, her pictures were all hand-printed in Chats Palace’s own darkroom – perhaps as a reward, the stately community centre takes pride of place in Portraits‘ urban role-call. Until January 2018